As promised, here is some information on the drawing room car ticket with a battleship revenue that I recently won on eBay. 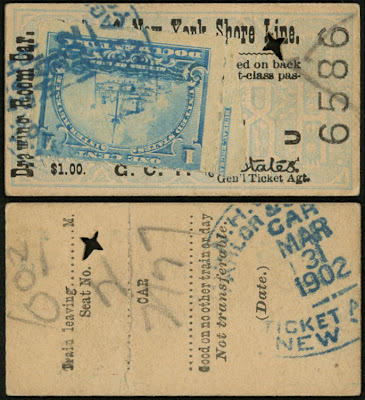 The seller listed this ticket as being from the Boston-New York Shore Line. Fine, but when I went to do some research on it, I couldn't find any such railroad existing in the proper time period. It does not help that the battleship revenue was applied over much of the name, and that the handstamp cancels do not show the railroad name clearly.

What I finally did track down was a Shore Line Express as part of the New York and Boston through train service of the New York, New Haven & Hartford Railroad. The Shore Line service left New York daily at 3:00 p.m. and stopped at New Haven, New London and Providence before reaching Boston at 9:00 p.m. A reverse route with the same timing also existed. The Official Guide of the Railways for February, 1901 described the Shore Line Express thus: "Vestibuled Parlor Cars and Vestibule Buffet Smoking Car New York to Boston and Through Coaches. Vestibuled Dining Car New London to Boston."

I'm satisfied that this is the correct railroad service for two reasons. First, there is definitely an "N.H." on the partial cancel on the back of the ticket, and something to the left of it, probably "N.Y. &." Second, on the front one can see that the General Ticket Agent's name was States, and J.N. States held this position for the New York, New Haven & Hartford in the relevant period. 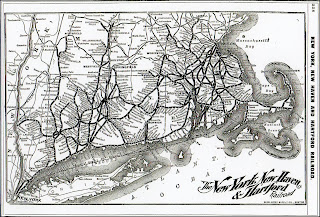