On Beyond Holcombe: Lawrence O. Gale of Mitchell, South Dakota 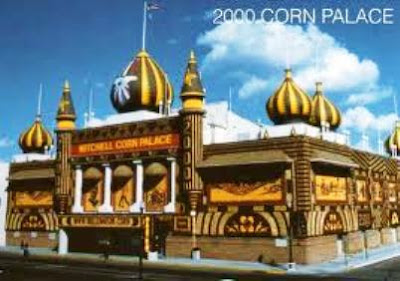 Mitchell, South Dakota is a town of under 15,000 inhabitants which today lies just off Interstate 90 virtually 300 miles due east across the Great Plains from Mount Rushmore. It originated in 1880 as a whistle stop in the vast Dakota Territory on the Chicago, Milwaukee and St. Paul Railroad, and took its name from the railroad’s president, Alexander Mitchell. Its great tourist attraction is its Corn Palace, now advertised as the only such building in the world dedicated to, and decorated each summer with, corn. Corn murals adorn its exterior and interior, and the structure features exhibits recounting the story of agriculture in South Dakota, in particular corn’s premier place in the region’s economy. Since 1937, the two story palace edifice has sported bulbous towers which give it a distinctly Moorish appearance. To this author, who happened upon the Corn Palace largely by chance in the summer of 2000, its drama, then and in memory, lies in its sheer incongruity with the flat, dusty, sleepy western town surrounding it.

Indirectly, when the author visited the Corn Palace, he also unknowingly touched upon the key fact of L. O. Gale’s existence as well. Lawrence O Gale now exists only as a product of “objective” records. The 1860 Federal Census lists him as age 9, living in Winhall, Vermont, making his birth year 1851. Even these “objective” records are blurred, for in the 1900 Federal Census, he himself listed his birth date as February, 1852, and other records show the date as 1853 or even 1854. In 1870, again according to the Federal Census (the only one to list Gale as a member of a family group), he, his mother and two sisters were living in Iowa, perhaps near Anamosa. From the 1880s into the 1900s, Gale was a retail druggist and jeweler in Mitchell, South Dakota. While there are cyclic reports in various publications of fires and monetary troubles, his ads for various stock patent medicines, in the style of the day, appear as neat, short paragraphs in the news columns of the local newspaper. Perhaps because Mitchell was quite small, he is also mentioned as a bookseller, sometimes alderman, land agent, builder, publisher of a poultry journal (and sponsor of a poultry trophy) and even local manager of its theater. His only extant newspaper quote speaks of his enthusiasm for Republican prospects in South Dakota in 1893. The rest of the “objective” record is even more spotty and eclectic. In 1908, a building he had constructed on Main Street in Mitchell burned down, and the site was taken over by someone else in 1910 apparently after he filed for bankruptcy. While in the 1900 Federal Census, he is listed as a widower, by the 1910 Census, he is listed as married - name of spouse unlisted - and living in Hennepin, MN, and in 1920, at age 68 (or 69) he is still in Hennepin, but now divorced. He appears to have died in Hennepin on September 3, 1931. Mitchell’s town website, although not specific, seems to indicate that he is buried in Mitchell.


If one trait of Gale’s does emerge from the sparse biographical data available, it is his flare for the dramatic. He is uniformly credited with introducing the idea of a “Corn Palace” to Mitchell in 1892. The real story is a little more complicated, but no less striking. In 1887, Sioux City, South Dakota, built the first Corn Palace, which was an immediate success, drawing 100,000 visitors including President Cleveland. However, Sioux City’s subsequent attempts to duplicate that triumph faltered, and in 1892, it abandoned the project. On an evening in July, 1892, Gale took an after dinner stroll with a fellow merchant, Louis Beckwith, who mentioned Sioux City’s abandonment of its troubled fair. Gale said: “why not build one here?” Historical accounts offer three variations on the reason for the bold proposal. First, Mitchell was then competing for preeminence as a community in South Dakota. Most accounts state the rivalry was with the town of Plankinton, 22 miles to the west, which was about to construct its own “Grain Palace.” (Other accounts claim the rivalry was really with Pierre to become the capital of South Dakota, but that contest actually occurred about ten years later and Mitchell lost). Second, Mitchell needed to attract farmers to come to the region to continue to grow and prosper. Third, Mitchell’s climate, then as now, is harsh. (In 1888, a blizzard left snow sixteen feet deep and temperatures hovered for a spell at 45 below, decimating the livestock population.) In short, as a raw frontier town in a hostile environment, Mitchell needed a gimmick to attract visitors’ attention as well as residents. Gale’s enthusiastic and unstinting devotion to the cause sparked a concerted expenditure of effort and cash by the townspeople.

He brought the Lawrence, Kansas artist Adam Rohe, who had designed the unique corn surface for Sioux City, to Mitchell. A breathless fifty-nine days later, the first Mitchell Corn Belt Exposition opened on September 28, 1892. The local newspaper touted that “Sixteen of Mitchell’s loveliest ladies attired in bewitching costumes will circle about and surround the living personification of Ceres, the goddess of grain.” The building and festival were denominated an “exposition” to differentiate it from the earlier Sioux City effort. The celebration in 1892 was an unqualified success, and - with significant gaps and hiccups caused by drought and poverty - the Corn Belt Exposition thereafter grew year by year. The building and event officially became the Corn Palace in 1905, and Gale and Rohe continued to be associated with the festival well into the 1900s. Perhaps one tale captures Gale’s audacity best. In 1904, when John Philip Souza brought his renowned band to play at the Exposition for six days, he reportedly refused to disembark from the train until he received his entire contract payment of $7,000 per day in cash, commenting: “What you gentlemen lack in judgement, you make up in nerve.” Gale’s flash of nerve may well account for Mitchell’s continued existence today.