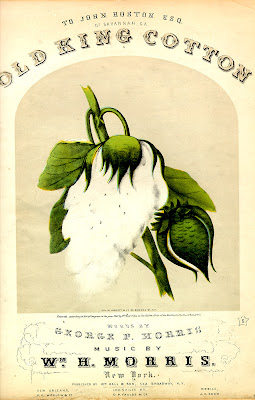 
In the 19th century, cotton played a major role in the economy of the United States.  Indeed, cotton interests were a major reason for the Civil War, and as we will learn in a coming post, residual stocks of cotton in the south following the war were a major source of cash to the United States after fighting stopped and the south could move its goods abroad without harassment.

Over the course of the coming week, all of the posts on this site will be about firms and traders in the cotton business.  Though the Spanish American war was more than 30 years after the end of the Civil War, cotton was still a major business in the United States.  However, with railroads and expansion westward, cotton would lose major importance in the US economy as industrialization and the food production of the midwest and plains expanded.

The rise of Chicago as a market for the agriculture of the midwest, and the major investment in railroads to move people and manufactured goods west and agricultural products east, changed forever the importance of the south in the American economy and the role of cotton.

Over the course of the week we will highlight:

I'm looking for more cotton related cancels.  Let me know what you have at 1898revenues@gmail.com. 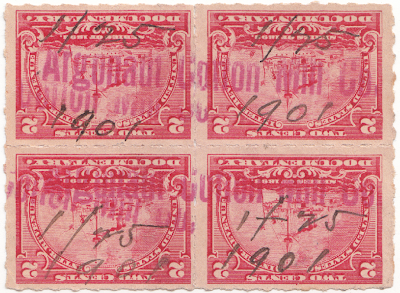 The Argonaut Cotton Mill Company was located in Covington, Kentucky.

In 1867 in Covington, KY, the commission merchant B. T. Stone would turn over his business to his employees Benjamin Putnam and Joseph J. Hooker.   The partnership of these two men would specialize in "southern cotton goods" and would build and operate the Argonaut Cotton Mill from 1892 - 1915.
Posted by John Langlois at 6:00 AM