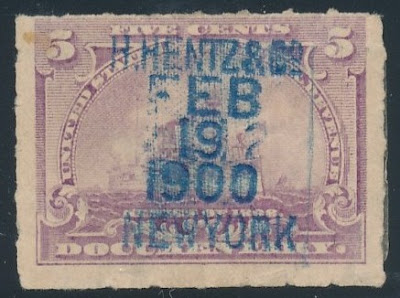 In the December 20, 1890 edition of The New York Times, Henry Hentz reflected on the history and conditions of the cotton industry, and the change in the business in the late 1800s to the trading of futures contracts on exchanges.  Mr. Hentz' reflections offer a fascinating summary of the trade in cotton during the mid to late 1800s, the role of the Cotton Exchanges, and role of futures contracts in reducing uncertainty and risk in the cotton business:

REMINISCENCES OF THE COTTON TRADE OF OLD.

METHODS OF TRANSACTING BUSINESS BEFORE AND DURING THE WAR--WHEN PRICES WERE HIGH--SOME OF THE OLD MERCHANTS AND FIRMS.

"There was a time when cotton was worth $1,000 a bale; now it is only worth about $50," sighed a veteran cotton broker recently, as he sauntered around the "pit" of the New York Cotton Exchange.

The remark set the writer thinking, and the result was that he asked Mr. Henry Hentz, the head of the firm Henry Hentz & Co., and one of the highest authorities upon cotton and the cotton market, a veteran among veteran merchants, to tell the public, through THE TIMES, something about the "old timers" and old time methods in the cotton trade of the past.

"There has been a complete change, so far as cotton is concerned, in the manner of doing business before and since the war", said Mr. Hentz.  [Mr. Hentz is referring to the Civil War].  "Before the war news was received by steamer from England only twice a week, and cotton was received from the south largely by sailing vessels.  Prior to 1860 little or no cotton was received by rail from the south and southwest; now we receive by rail about a million bales a year.

"Bills against the shipments were drawn at sixty days' sight, but during the war the custom of drawing at sight was adopted, and has been continued ever since.  Before the war none of the banking institutions would think of lending money upon a bill of lading for cotton or for cotton warehoused here.  Such a transaction was considered outside of the functions of banking.  For my part I think there is no better security than a bale of cotton backed by a margin of $10 a bale.  That article always commands cash readily, and a great deal of it can be sold without affecting the market seriously.

"Before the war a large business was done in 'transit cotton'.  That system is now practically abolished.  Transit shipments were made in the South this way:  A bill of lading was taken to order, indorsed [sic] in blank; the marine insurance was effected in New York, where the cotton was sold upon the southern samples, the correctness of which the seller guaranteed.  The samples were sealed up, sent to Europe, and when the cotton arrived there the samples were compared with redrawn samples in the presence of the seller's referee, who would certify to their being correct or as to any differences which might be found.  The sellers in New York would pay claims arising out of such differences on the production of a certificate to the effect that the claim was a just one.

"Our house, before the war, was mainly confined to that style of business.  There was, in those days, a decided prejudice against shipping cotton by steam; practically, all the cotton went by sailing vessels.  I remember when the late John G. Dale, agent for the Inman Line, purchased a few hundred bales of cotton to get freight for his steamers.  Then it was quite a common occurrence for sailing vessels to remain on the bar at the mouth of the Mississippi River for thirty or sixty days; in fact, we had cotton, after hostilities had been declared, detained on the bar as late as July, 1861.  It required several powerful tugs to pull them through the mud.

"During the war a good deal of cotton ran the blockade from Wilmington, Charleston, and Mobile; it was very scarce here, then, and the price advanced to $2 per pound, currency price, or $1,000 a bale; the price is now about $50; gold was then up to about 200.  Cotton had risen to $2 per pound from 10 cents per pound when the war broke out.  It was worth about 30 pence at Liverpool during the war.  To such an extent did prices go up that, during the war, American cotton was imported from Liverpool.  We made the first importation in December, 1861; it has been imported since the war to meet 'corners' in New York.

"Very few people are aware of the important part cotton played in the finances of this country when the war was ended.  At that period there were about 2 million bales of cotton in the south, worth about $200 per bale, or $400 million.  About three quarters of this amount was taken by Europe, and it gave this country the value of $300 million in gold, which was practically like digging that quantity of gold from the earth.  [Of course, Mr. Hentz, it was not like digging gold from the earth -- slaves picked that cotton.  It is ironic that slave labor helped save US finances post war]  If it had not been for the existence of so much cotton ready to be sold to Europe, no one could have said what would then have been the outcome of the financial situation.

Many old fashioned business people were, and still may be, prejudiced against the present system of doing business in cotton.  But they are what we may term 'back numbers'.  Prior to the establishment of Exchanges the losses by failures of houses in the cotton trade were very disastrous.  If any one of them had a large stock of cotton on hand, they could rarely get rid of it until bottom prices were reached, as the buyers naturally held off.  I recall during the panic of 1857, when private paper sold as high as 4 percent per month, I was informed that Moses Taylor's paper sold as high as that; and I know of a note of Willete & Co., the great Quaker house, having fifteen days to run, sold at 15 percent discount from its face value.  Cotton fell from 16 cents to 9 cents during that crisis.

"People who, before the time of the Exchanges, shipped cotton to Liverpool, were obliged to submit to very heavy losses in a declining market.  But since dealing in future deliveries has been established there is no need for anyone making heavy losses, as they are afforded the opportunity of selling futures against their holdings, and can thus stop the loss.  Failures nowadays in the cotton trade are less important than formerly, as the system of calling for cash margins causes a house to stop before getting in too deep.  The recent failures of Richard H. Allen & Co. and V. & A. Meyer & Co. caused very little loss to the members of the Exchanges.

"During 1866 and 1867, before the New York Cotton Exchange was established, cotton dropped from 24d. to 7d. in Liverpool.  The crop of 1867-8 was a very small one, only about 2.5 million bales, and it was taxed at 2 cents a pound by the Government.  The average price for the five years before the war was about 7d. per pound.  Now, I say with emphasis, cotton never would have dropped to such a low point--it subsequently advanced to 33d. in 1868-69--had there been an opportunity for the holders to have hedged their holdings by the sale of futures.

"It is now the custom, and one that is rapidly growing, for the mill corporations in New England to contract for their future supply of cotton for delivery throughout the season.  By making such contracts they are enabled to name a price for their goods for future delivery.  They secure the cotton through the New York and southern houses, who would not dare to take the risk if they did not purchase contracts in New York for delivery in the months they contract for with the mills.  The cotton is seldom shipped from New York; it goes direct from the Southern interior towns to the mills.  Those selling to the mills sell out their contracts in New York, as they buy in the South.

"When cotton seems pretty high to many planters, they sell futures in New York, and when their crop is ready to be delivered they ship it to their nearest town, sell it, and then buy in their contracts in New York.  Quite a number have sold at the high prices that ruled here during the summer and have covered at a lower price since, which shows that they did not speculate when they made the transaction, but that they desired to secure the ruling price for cotton, which was profitable to them.

"The business of selling fertilizers to the south is an immense one.  The people in that line of trade contract to sell fertilizers to the planters at so much per ton for cash, or at another price payable in cotton at 9 cents per pound.  If the crop promises to be a full one and the price is about 10 cents, the fertilizer companies are willing to sell contracts in New York to secure their profits on the sales of fertilizers.

"The Exchanges, it should be added, keep the values more steady than under the old system of trading.  During the French Revolution and during the coup d'etat in 1848 and in 1851, cotton fell below 4 cents a pound.  No such decline would occur under the present system.

"The Farmers' Alliances are all wrong in opposing the future delivery system.  If we could not work under that system, especially during periods of depression, cotton and other merchandise would have to sink to a point where the big capitalists only would be able to come in and buy.  The future system enables the many small capitalists, who are generally bulls, to prevent a big drop.  The price of grain and wheat this season, by the aid of bull operations and the various Exchanges, have been pushed up to 20 to 25 cents a bushel above European values...

Mr. Hentz continues in the article, and recalls cotton brokers of the past.  You can find the balance of the NYT article here.