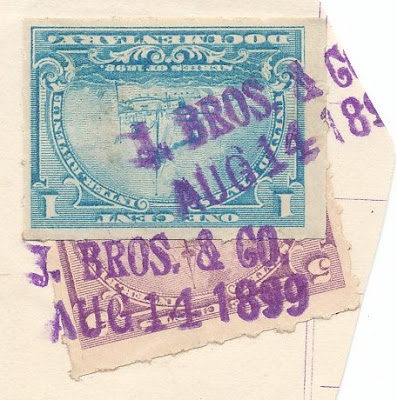 There were many Jackon members of the CBOT and Jackson Brothers & Company, including:
#2935 Howard B. Jackson
#2081 William S. Jackson
#4669 Darius C. Jackson

From the History of the Board of Trade of the City of Chicago, 1917

William S. Jackson. — For nearly forty years the late William S. Jackson was a vigorous, honored and influential member of the Board of Trade of the City of Chicago, and his was the distinction of having served as its president in 1903 and 1904, his able administration having fully justified the honor thus conferred upon him by his appreciative fellow members.

It was his to achieve substantial success as a representative of the grain commission business in the western metropolis, and that success was won by worthy and legitimate means, as his course in life was ever guided and governed by the highest principles of integrity and honor and he fully merited the confidence and esteem that were uniformly reposed in him.

He was the virtual founder of the large and important commission business that is still continued by his brother, Howard B., and his son, Arthur S., under the firm title of Jackson Brothers & Company, and it is most gratifying to record that as public-spirited citizens and alert and progressive business men these two are well upholding the prestige of the family name. Mr. Jackson continued his active identification with the Board of Trade from 1876 to the time of his death, and he was summoned to eternal rest on the 18th of November, 1914, a man of strength of purpose and of the finest civic and business ideals.

William S. Jackson was born at Adrian, the judicial center of Lenawee county, Michigan, on the 4th of December, 1841, and this date indicates beyond peradventure that his parents were numbered among the pioneers of that section of the Wolverine state. In his youth Mr. Jackson received excellent educational advantages as guaged by the standards of the locality and period, and his higher academic training was acquired in the University of Wisconsin, at Madison. His father served as a sheriff in Wisconsin, at the time of the Civil War, and incidentally he himself was enabled to gain youthful experience in the position of deputy sheriff under his honored sire.

In 1875 Mr. Jackson, as a young man of thirty-four years, came to Chicago, and in the following year he became a member of the Board of Trade, through the medium of which he was destined to gain marked precedence and success as an influential exponent of the commission business in grain. His broad views and well fortified opinions made him for many years one of the leaders in the governmental affairs and general functional activities of the Board of Trade, but to the public in general he became better known for his civic loyalty and public spirit and for his active association with railway construction.

In 1896 he was elected to represent the old Third ward of Chicago on the board of aldermen, and of this position he continued the vigorous, faithful and valued incumbent for a period of eight years. His unfaltering loyalty was manifested in his earnest support of measures tending to advance the general welfare of the city of its people, and he was specially zealous in the advocacy of the important policy of effecting the elevation of railroad tracks within the city and in making municipal provision for the establishing of small parks. His personal charities and benevolences were unceasing and invariably marked by unostentatious and kindly zeal, besides which he was for many years a director of the United Charities of Chicago.
His political allegiance was given to the Republican party and his religious faith was that of the Presbyterian church.
Posted by John Langlois at 6:00 AM