Chicago Board of Trade Members: James A. Edwards 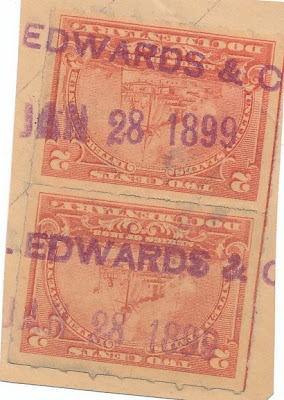 From The History of The Board of Trade of the City of Chicago, 1917:

James Augustus Edwards. — In preparing a review of the lives of men whose careers have been honorably blended with the history of the Board of Trade of the City of Chicago, no name is more worthy of mention than that of the late James A. Edwards, for many years a successful business man of this city and an active
member of the organization. His labors not only constituted a potent factor in the progress and development of the city, but were an inspiring influence, and even though he has passed from the scene of earthly activities his work remains as a force for good in the community. He not only achieved notable success in business, but in his home, in social and public life, he was kind and courteous, and no citizen of Chicago was more respected or enjoyed the confidence of the people or more richly deserved the regard in which he was held.

Mr. Edwards was born in Baltimore, Maryland, November 11, 1854, a son of Dr. Edward W. and Catherine R. Edwards, who were pioneers of Chicago, having removed to this city from Baltimore when our subject was six years of age. The father was a physician and surgeon, and was one of the learned men of his profession who gave impetus to the work of science in this city. After acquiring a substantial education in the public and private schools of Chicago, James A. Edwards began his business career when sixteen years of age with the old established Board of Trade firm of Culver & Co. He remained with that house until the close of the year 1872, and in the following year entered the employ of Dennis & Ingham, who were in the same line, and continued with the latter firm until 1874. In May, 1875, he embarked in business for himself, becoming an exponent of the grain commission trade, of which he became one of the prominent and influential representatives. To meet the demands of the constantly expanding trade, and as a matter of commercial expediency, the business was incorporated in 1898, and was also reorganized in 1912, although Mr. Edwards remained the executive head until his retirement from business activities in April, 1916.

He was a loyal and most valued member of the Board of Trade during his entire identification with the organization, and was one of those upright and sagacious men who have aided in furthering the prosperity and prestige of this great institution. He joined the Board May 21, 1877, and was one of its active members until April 19, 1916, when he transferred his membership to his son Donald Edwards. Coming to this city when a small boy and entering business life when a lad of sixteen, Mr. Edwards grew up with Chicago during the period of its most marvelous development, and through pluck, perseverance and honorable dealing he became one of its substantial and most valued citizens. A man of unusual public spirit, interested in local affairs and proud of the city in which much of his activities and mature manhood were passed, he was a powerful factor in the furtherance of any measure which had for its aim the advancement of the people or the betterment of existing conditions. To sketch in detail his work during his active business life would be a task of no small moment, however agreeable and interesting. It must suffice to say in conclusion that his labors were of the most earnest character, that they were exceedingly comprehensive, and that they contributed in a most important degree to the development of the agricultural and commercial prosperity and wealth of the section in which they were performed, and in no slight measure to the material advantage of the whole country. Although making no claim to greater credit than that which belonged to one, who by wise and persistent effort, advanced his own fortune and at the same time that of hundreds, even thousands, who shared in one way or another in his enterprises, a discriminating pubHc sentiment will not fail to accord him a front rank among the commercial benefactors of the country.
On April 12, 1882, Mr. Edwards was united in marriage with Miss Minnie E. Paine, a daughter of the late Joseph E. Pame, of Brooklyn, New York, and a woman of exceptional mental capacity and much beauty of character. They became the parents of two sons and two daughters ; the sons, Kenneth P. and Donald Edwards, are both active members of the Board of Trade and are classed with the enterprising and conservative commission merchants of the city. The former joined the Board December 23, 1908, and the
latter became a member by transfer of his father's membership on April 19, 1916, and both are associated with the firm of J. A. Edwards & Co. The daughters are Marjorie Edwards, who resides with her mother, and Dorothy, who became the wife of Frederick A. Rogers, of Indianapolis, Indiana.

The family home has been in Hyde Park for many years. It is a hospitable one, where good cheer abounds, and where the family's numerous friends are ever welcome. Although unostentatious in manner, Mr. Edwards was recognized as a man of earnest purpose and progressive principles.  He always stood for the things that were right, and for the advancement of citizenship, and was interested in all that pertains to
modern improvements along material, intellectual and moral lines.  Though he had many warm friends and was prominent in social circles, he was devoted to the pleasures of home life, and his happiest moments were always spent at his own fireside. He found pleasure in promoting the welfare of his wife and children, and was a kind husband and an indulgent father.

He was identified with various social organizations of representative order, including the Chicago Athletic Association, the Forty Club and the Midlothian and South Shore Country Clubs. In the Masonic fraternity he had completed the circle of both the York and Scottish Rites, besides having been affiliated with the adjunct organization, Medina Temple of the Ancient Arabic Order of the Nobles of the Mystic Shrine.  His ancient craft affiliation was with Ashland Lodge, No. 308, Free & Accepted Masons.

Although he was a stalwart Republican in his political affiliations he took no part in politics aside from casting the weight of his influence in support of men and measure, working for the public good, and at no time was animated with a desire for public office. In business life he was alert, sagacious and reliable; as a citizen he was honorable, prompt and true to every engagement, and his death, which occurred January 15, 1917,
removed from Chicago one of its most valued citizens.