A screaming advertisement for interested investors in "liquid air" from US Investor, 1899.
Snake oil pitchmen used documentary stamps too!

And what was liquid air?  Nothing but compressed air, mixed with mysterious and patented technical innovations making it the most wonderous power source ever controlled by man.   The pitchmen loved it, and the fad investors couldn't help themselves.  Collectors of battleship revenue stamps can find their own mementos of this version of late 19th century cold fusion: 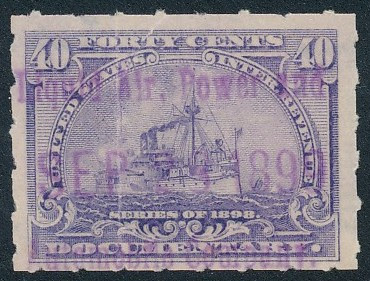 The Liquid Air, Power & Automobile Company's production facilities were opened in 1899, and by 1901 the company was in receivership.  The company had a British-based partnership with a similarly named firm.  On either side of the Atlantic the company seemed to be nothing but an investment hoax.

Read below the spellbinding hokum and nonsense from the promoters of this company in an advertisement soliciting investments in the Liquid Air, Power & Automobile Company placed in The New York Sun, September 3, 1899:

What is Liquid Air?

The question "What is Liquid Air?" has been frequently asked, but we believe rarely, if ever, answered in a way intelligible to any but the scientist.  It is simply the atmosphere we breathe, compressed in a series of cylinders, each successive cylinder pressing the air into a smaller and smaller space, the air after each pressure passing through cooling tanks, untill finally when squeezed into about one eight-hundredth of its orginal compass, and cooled to 312 degrees below zero, it changes from a gaseous state to a liquid.  That it is possible to achieve such a result with air is a difficult idea to grasp, but it is a scientific fact.  When this liquid is again exposed to the heat of the ordinary air it expands to its original volume with such rapidity as to exert a force or pressure of over 12,000 pounds to the square inch, giving a tremendous impetus to whatever it encounters, and this pressure is vastly increased by the superheating process of this Company.

This expansive power of liquid air is the greatest force ever discovered in nature.  So tremendous is its energy that no other power can compare or compete with it.  Its natural pressure of 12,000 pounds to the square inch is not rivalled by any other power known, yet even this marvelous energy, intensified by superheating, is so regulated by the simple mechanism of our processes that it is under perfect control; and it is at the same time so economically produced by our method (which differs entirely from any other) that it is cheaper by far than any other power known.

Harnessed as it is by our inventions, it is capable of driving all the mills of the world, all the wheeled vehicles, and all the ships of commerce or war, more swiftly, cleanly and cheaply than they ever were driven before; and it relieves the railroad traveller from his cinders, the streets streets from half their disease-breeding dirt, and the atmosphere from all its foulness, thus adding to the comfort and health of mankind.

It was claimed when electricity was first applied to steam car traffic that it would prove far more costly than horse-power; yet the result has been a reduction of 50%, in running expense.  So it is again claimed now that liquid air cannot be made effective except at a prohibitive price.

The claim is made now, as then, by the people who have not acquainted themselves with the facts; and the fact will prove them in this case, as it di in that, false prophets.  More money will be saved, and more made, by the use of liquid air under patents owned by this company, than was ever saved or made before since inventions began; and this will be demonstrated within a few months.

The Liquid Air Power & Automobile Co.'s factory and equipment represent an investment of over $100,000; its financial condition is substantial; its patents protect its processes to the extent of a monopoly of the practical use of liquid air as power; its operations are progressing to the entire satisfaction of its directors and stockholders; and its profits will exceed those of any enterprise over yet undertaken in any field, commercial, mining, or inventive.  The time is not far distant when, on the stock exchanges of the country, on of the biggest industrial securities traded in will be the shares of this Company.

Those who would like to be among the original holders of such shares are invited to investigate the Company, inspect its machinery and inform themselves fully as to its capabilities and prospects.  When they have done this, we shall not need to solicit their subscriptions; those will be voluntary.  We only solicit the investigation.

For the purpose of more rapidly advancing the Company's operations, we are selling

of our capital stock at

par value $10, full-paid and non-assessable; and we believe it the best investment ever offered in the history of finance.

Send for our prospectus -- it cannot fail to interest every one.