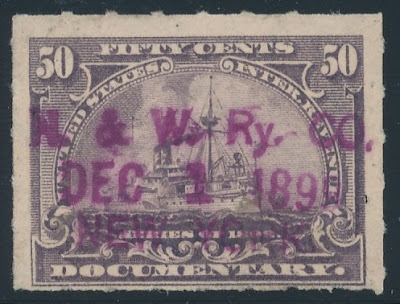 The Norfolk & Western was a Roanoke, Virginia-based railroad that served primarily to haul West Virginia coal to the Atlantic coast.  It prospered through its own business and through mergers with successful railroads and coal haulers like The Virginian.  Remnants of the N&W still remain vital today as components of one of the major railroads in the United States, The Norfolk Southern. 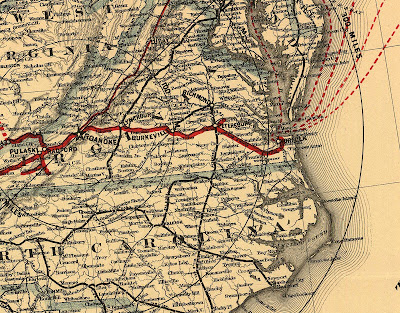 Map showing the Norfolk & Western's mainline from West Virginia thru Roanoke and into Norfolk, Virginia on the Atlantic coast. 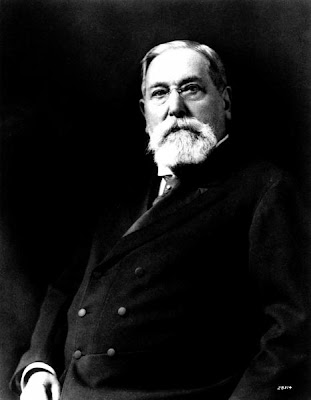 Henry Fink, President of the Norfolk & Western Railway
From the June 2, 1901  New York Times:
THE OUTLOOK FOR THE SOUTH
President Henry Fink of Norfolk and Western declares that in his opinion the greatest development during the next century in any part of the country will be in the South, which, he believes, has a wonderfully prosperous future before it.  Along these lines, President Fink says:
"The South is an empire in itself.  In my opinion the next century will see it develop far beyond all present expectations.  And why should not this be?   It is a magnificent country, with a fine climate and rich in its natural resources.  All it needs is capital and enterprise, and both of these it will surely get to the full in due time.  Indeed, in the last few years there has been a wonderful development and progress all through the south.  Time there was that the south was altogether an agricultural country.  Now it is this, and more.  It is fast becoming a manufacturing section, and promises to soon show great strength in this respect.
"There has recently been--and it is worth noticing at this time--great improvement in the legislation of the Southern States.  Some years ago railroads and other corporations were troubled with all kinds of hostile legislation.  Now a reaction is settling in.  The people are taking a more intelligent view of matters, and are not so much governed by demagogues. [ed. note: I am from Louisiana.  Huey Long, the ultimate demagoge, was about to emerge on the southern and national scene] The policy pursued now is one of live and let live; it is an enlightened policy, in short.  [ed. note:  I guess Fink forgot about Jim Crow, poll taxes, and all manner of unenlightened practices; Plessy vs. Ferguson was only 5 years old when he spoke to The New York Times] Hence, corporations and institutions generally can now proceed with every fair chance to succeed.  And so it is that I have the greatest faith in the future of the Southern country.  I have spent the best part of my life there, and I appreciate its recent astonishing progress.
"I have heard it declared in some quarters that the recent panic in Wall Street may, after al, have been due more to unfavorable general conditions that was supposed.   I do not see how this can be.  General business conditions are excellent and are just as good now as they were before the panic.  As a matter of fact, there never was in my opinion any justification for the very high prices of some securities in the stock market, and for that reason the panic was a good thing in forcing quotations down to a proper level.  It would have been better, however, if prices had not tumbled so suddenly but had reached their proper level gradually.
Posted by John Langlois at 6:00 AM