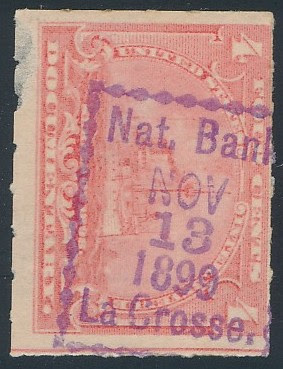 Nat. Bank
NOV
13
1899
La Crosse.
John M. Levy started the first bank in La Crosse in 1855. Soon after, the Green Bay Bank was organized, but both failed in the Panicof 1857. Gysbert van Steenwyk established the Batavian Bank in 1861 and re-organized it in 1883 as a national bank. The First National Bank became a competitor in 1863 but failed in 1875.20 A group of wealthy citizens, G.C. Hixon and Judge S.S. Burton among them, saw the need for another bank. They organized the La Crosse National Bank and started operations on January 3, 1877. It was capitalized at $100,000 and opened for business on the corner of Second and Main Streets. Hixon became president and a member of the board of directors. The directors obtained a new charter in 1896 designating it as the National Bank of La Crosse. Sixty years later their successors changed its name to the First National Bank of La Crosse.

From A SKETCH OF GIDEON COOLEY HIXON: LA CROSSE LUMBERMAN, A Seminar Paper Presented to the Faculty of the Graduate School Wisconsin State University at La Crosse, In Partial Fulfillment of the Requirements for the Degree, Master of Science in Education by Drucilla Kathleen Munson, July 1967
Posted by John Langlois at 12:01 AM