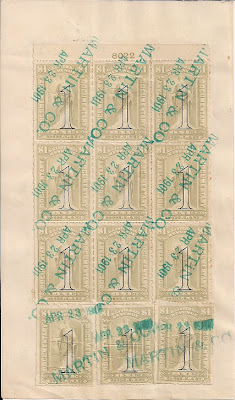 
A photo of Augustus Fitz-Randolph Martin, the founder of Martin & CO, doesn't appear in King's Views of the New York Stock Exchange. He died at age 55 on October 16, 1897, the year prior to its publication. According to his death notice in the New York Times, he became a member of the stock exchange in 1866. Although not listed in King's, the 1901 sales memorandum shown here indicates the firm continued after his death.


Affixed to the reverse is a nice plate block of nine of the $1 gray overprint Commerce issue with three more $1 singles affixed below the block; all are cut-cancelled and handstamped with a two-line company handstamp. Used plate blocks of any the Commerce issue can't be very common -- its presence on this document makes me wonder if the person who prepared this memorandum was a stamp collector.

"Linseed" most likely refers to the American Linseed Company formed December 5, 1898 in New Jersey. Information about this company's early business is scant; it paid quarterly dividends until December 1900 when payments ceased. A 1909 New York Times article indicates after losing more than $1,400,000 in 1901, the company didn't provide any annual reports until 1909. That huge loss perhaps explains the low stock price.


The company's failure to provide annual reports perhaps is explained by the fact that John D. Rockefeller and Standard Oil took control of it in 1901 as reported by the New York Times on April 25, 1901, just 2 days after this sale occurred. Hmmm! If documents could talk we'd likely get some interesting insider information! As indicated by this 1915 New York Times article, Rockefeller held the company close, controlling its Board and funding it whenever necessary, but otherwise not paying dividends.


Fast forwarding to today, we find Bestfoods, one of the largest food companies in the United States, (think Hellman's Mayonnaise and Skippy Peanut Butter), traces its roots back to American Linseed. It's a long history that includes a 1913 Sherman Antitrust Suit (shades of Rockefeller's Standard Oil situation).


It's unclear if Watson & Brown, the brokers who bought these 600 shares of American Linseed for such a low price on April 23, 1901, had knowledge of Rockefeller's pending takeover of the company or if they subsequently profited from the purchase, but the timing certainly suggests that possibility. 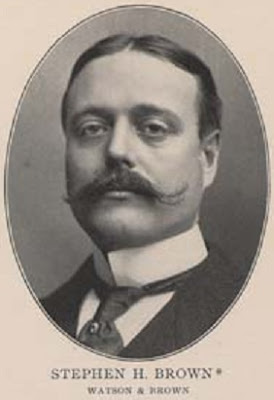