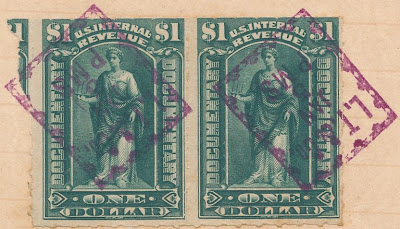 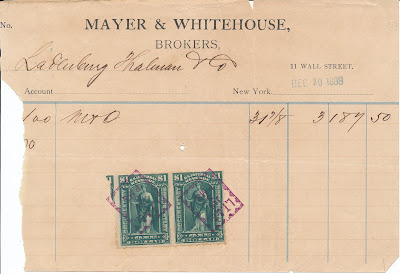 Memorandum of sale between Mayer & Whitehouse and Ladenburg Thalman for shares of the Mobile & Ohio Railroad.
Yesterday, Frank Sente featured stock trading documents from Ladenburg Thalman & Co., and referred to the memorandum of sale above.  I wanted to add a bit to the possibilities of what could be happening with LT & Co trading in shares like those of the Mobile & Ohio.  It appears that a good portion of LT's business may have been from arbitrage trades; the firm played the difference in stock prices between two markets, and made profits on the difference.  The little book that has meant so much to this site in the past three months, King's Views of the New York Stock exchange, provides a glimpse into what may be happening with many of LT & Co's trades:
From King's Views, page 20:
Meanwhile, the "arbitrage houses" have also been in close touch with their correspondents in London over the cable, and their clerks have been busy noting prices and coding orders and instructions.  The "arbitrage houses" make a business of buying and selling between the two markets, according as a margin of profit offers itself by disparity in prices, and in active markets each house will send and receive many cables in a minute.  There are about eight or ten of such houses, among whom L. von Hoffman & Co., Ladenburg Thalman & Co., L. H. Niles & Co., Probst, Wetzler & Co., and I. & S. Wormser are prominent.  The principal arbitrage houses in London are R. Raphael & Sons, Leon Bros., Satterthwaite & Co., Huggins & Clark, and Borthwick, Wark & Co.
The houses just named make a business of dealing between the two markets.  Suppose St. Paul stock [the Chicago, Milwaukee & St. Paul, or Milwaukee Road was known as the "St. Paul" in 1897] to be 93 1/2 "sellers" in London at 3 PM, while the first quotation in New York is 91 1/4.  As all American stocks in London are quoted on an arbitrary basis of $5 to 1 pound, (i. e., $1 equals 4 shillings), the London quotation is equal to a quotation of 90.69 in New York (with exchange at 4.85), so that with the opening quotation of 91 1/4 the arbitrage house [Ladenburg Thalman & Co.], for example -- buys St. Paul in London at 93 1/2, and sells St. Paul in New York at 91 1/4/  There is a pure profit in the transaction of over 50 cents per share...
Arbitrage houses alone can provide an interesting collecting area for the 1898s.  The transatlantic cable that allowed for London - New York arbitrage was a new technology over the Civil War tax period; a fascinating field could be the collecing of arbitrage transaction documents from the two sides of the Atlantic.
Posted by John Langlois at 6:00 AM