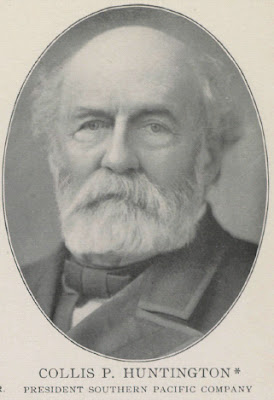 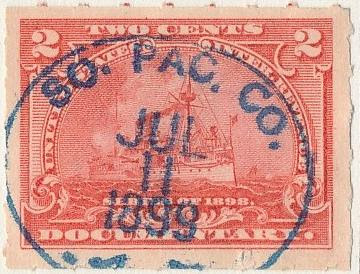 SO. PAC. CO.
JUL
11
1898
Collis Huntington was far more than the President of the Southern Pacific during his lifetime.  He was the driving force behind the organization and execution of the Central Pacific Railroad, the railroad that began in California and laid track to Utah to join up with the Union Pacific to create North America's and the United State's first transcontinental railroad.
He also became a key figure in one of the great eastern railroads, the Chesapeake & Ohio Railway.  His power and influence for the railroad led to the naming of Huntington, West Virginia, after him.  The Southern Pacific was perhaps his greatest corporate success, as the SP built its own line south through California and across the United States to New Orleans.  The SP became a long-lived and profitable railroad.
Collis Huntington died in 1900.
From the August 15, 1900 New York Times:
MR. HUNTINGTON'S CAREER.
As a Railroad Builder, Financier, and Resourceful Man of Business, He Stood Pre-eminent.
Collis Potter Huntington, railroad magnate--one of the six men who are at the head of the American railroad systems--multi-millionaire, one of the greatest land holders of the United States, are connoiseur and patron, humanitarian, and patient, hopeful, resourceful man of business and financier, had a remarkable career in his long and successful span of eight decades.  On his death came full recognition of one of his chief characteristics.  "He was a builder up, not a puller down," said a millionaire business associate.  He was a walking cathedral beside Commodore Vanderbilt, who did not build his roads, while Huntington constructed them mile by mile into systems.  Take the very reverse of Jay Gould and you have Huntington.  Wall Street, the business community, and the Americanism that is embodied in fealty to trust and go-aheadedness never saw his equal....
Posted by John Langlois at 12:00 AM