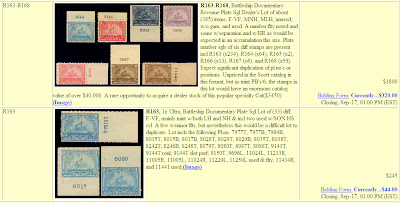 Two 1898 lots from current Sam Houston Philatelics sale
Stamp Auction Network screen capture
You can view the documentary lots in this sale by clicking here to go to Stamp Auction Network.
Sam Houston Philatelics, which I associate with only selling duck stamps, has an upcoming auction that can be accessed through Stamp Auction Network.  A link is provided above.  The auction includes a bunch of lots of battleship plate number singles.  Proprietaries are included but there are several lots of documentary plate number singles.
As in many auction lot descriptions the lots are enthusiastically described.  The value of the plate number singles are associated with battleship plate block prices, at least narratively.  Of course, 1898 collectors know that plate number singles are relatively common while plate and imprint blocks of six are scarce and in some cases, quite rare.
This is a good opportuntity, however, to acquire large quantities of these singles for the number and position collector.  Let's see how these lots sell at auction.  Thanks to Dave Thompson for calling my attention to these lots.
Posted by John Langlois at 6:00 AM