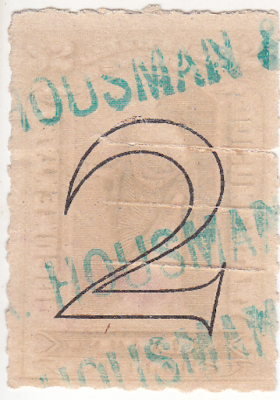 This firm puts us squarely in the middle of Wall Street history.  Arthur Housman was a partner of William Burrill in the firm Burrill & Housman, formed in 1885 (the firm Burrill & Stitt will feature in a future post).  Arthur Housman formed his own firm called A. A. Housman & Co. in the 1890s and under this name was a broker for J. P. Morgan.  He is credited with playing a prominent role in restoring calm during the Panic of 1901.

The panic of 1901 was the first crash of NYSE and occured due to a fight over control of the Northern Pacific Railway.  Arthur Housman would eventually take on Edward A. Pierce and Bernard Baruch as partners.  After Housman's death in 1907, Edward Pierce would control the firm and it would be renamed E. A. Pierce & Company.  This company would be the largest brokerage in the US through the 1930s.  Eventually it would form partnerships that would result in a new company by 1940 called Merrill Lynch, Pierce, Fenner & Beane. 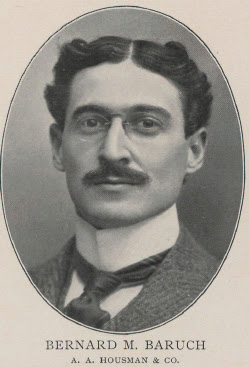 Bernard Baruch is one of the most famous Wall Street "lone wolves." Though he began his career at A. A. Housman, he left and took his substantial earnings to buy his own seat on the New York Stock Exchange.  By 30 he became extremely wealthy, and for the majority of his life he spent his time as an advisor to Presidents Roosevelt and Truman and as a philanthropist.
Posted by John Langlois at 6:00 AM