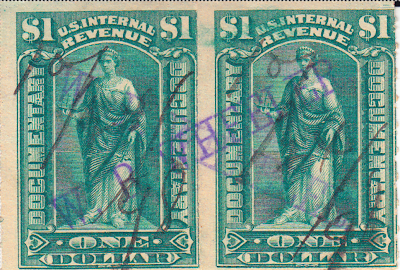 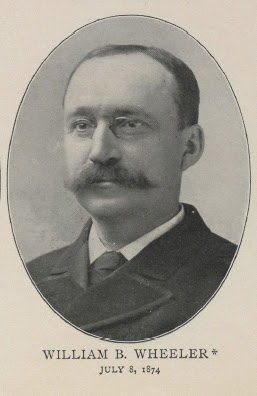 From the New York Times, April 14, 1896:
W. B. WHEELER & CO.'S FAILURE
ONCE MOST ACTIVE STOCK-TRADING FIRM IN WALL STREET.
No Contracts at the Stock Exchange and Liabilities Not Heavy--To Make Assignment Today
W. B. Wheeler & Co., at one time the most active stock-trading firm in Wall Street, sent word to the Stock Exchange yesterday that they were unable to meet their obligations.  The firm had no contracts at the exchange, nor were its outside liabilities large.  Since its condition had not escaped rumors, comments on the announcement were of sympathy and regret rather than of surprise.  As assignment will be made today.
William B. Wheeler, senior member of the firm, won a reputation years ago as a bold and successful operator.  His membership in the stock exchange dates back to July, 1874.  Fifteen years ago he had become prominent.  Addisson Cammack though so well of his judgment and pluck that he went into stock operations on joint account with him.  It was understood also that Mr. Wheeler executed orders for Mr. Cammack, although Mr. Wheeler preferred room trading on his own account rather than taking commissions from customers.  His boldest plays were made on the bear side of the market.  He easily held the lead among traders for years, and was reputed wealthy.
....
Speaking of the cause of the failure, Mr. Wheeler said, "Our failure is due to our inability to collect old debts and to dry rot.  The debts are stock accounts on the books.  I have, however, no recriminations for anyone.  Our reputation was injured some months ago by rumors that were circulated in Wall Street that we were in difficulty.  We will make an assignment, though the details have not been fully arranged.
"The failure will be a small one as such things go.  Had it occurred some years back it might have been big.  We have no outstanding contracts on the exchange at present time...
Mr. Wheeler's genial disposition made him a favorite among brokers, who put him at the front in diversions in which they are prone to engage.  He was one of the Wall Street company which backed the New York Baseball Club prior to last season, and it was his habit to take his office force and enough others to make a good party to every game at the Polo Grounds.
Posted by John Langlois at 6:00 AM