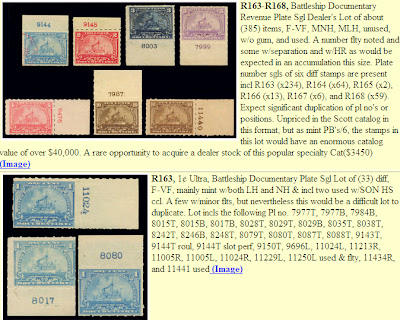 Sam Houston Philatelics has listed the results of its September 17 auction.  Posted on Stamp Auction Network, the auction included several lots of battleship plate number singles.
I can't quite understand how they valued the lots.  At first I thought they were valued according to the value of the unused singles in the Scott Catalogue.  Yet many of the lots as described and priced don't even get close to the listed value.
To no surprise, the singles sold across the board for less than their posted price.  Battleship plate number singles are relatively common, while plate blocks are scarce and some quite rare.  The sale results:
Lot 448  Collection of R163-R168 plate number singles (photo at top), 385 stamps, As claimed, Scott value for singles:  $3450, Lot listed for $1800, SOLD for $675.00.
Lot 449  33 1ct Documentary plate number singles. Listed for $245.00, SOLD for $115.00. 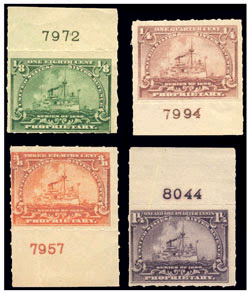 Seems to me we have two phenomena happening here:
Again, battleship plate number singles are not scarce, though Sam Houston referred to the value of the scarce plate blocks as setting a potential value maximum for the plate singles.  I would have set the value of the plate singles at a small multiple of the singles prices in Scott.  Yet valuations based on this method were actually exceeded by the prices paid.  Though it does not appear so, these results were bullish for 1898 values.
Posted by John Langlois at 6:00 AM