When 1898 Revenues first when online, the background was all black, and there was no title art.  The first post included Milwaukee Road printed and handstamp cancels on a 2 cent documentary battleship.  And I knew far less about these stamps than I do now. 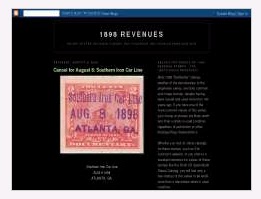 screen capture from 1898 Revenues old look -- back when the site was far less complex
In the past two years the site has managed to collect a few loyal readers and some knowledgeable contributors.  Thanks to all for reading and stopping by, and I look forward to continued publishing for at least another two years.

Big thanks go out to all those that have added so much to this effort, especially Frank Sente, Dave Thompson, and Bob Hohertz.

I will keep the site's current appearance the same for the next couple of months, but I may do some tinkering  during the summer.  For now I like the look, though I'm always interested in suggestions.  Bob Mustacich is now going for a battleship revenue stamp appearance in his site art.  Hmm...

Advice and comments on the blog are always welcome.  Please write to me at 1898revenues@gmail.com.

John
Posted by John Langlois at 7:00 AM