Bob Mustacich has begun a major update of his Battleship Revenues website.  The layout is new and there is new content, especially in the listings and illustrations of railroad cancels.  I am in the process of providing new scans for Bob's effort.

As some of you know, Bob's site is the home for his work the Battleship Desk Reference, which provides an extensive listing and datebase of pharmaceutical and drug firms during the 1898 tax period.  The book and the website are a major work and reference for collectors of proprietary battleships, especially those with handstamps and indecipherable initials.

Now Bob is adding much more documentary data, especially with regard to railroad hanndstamp cancels.  More about railroads after a shot of the home page immediately below: 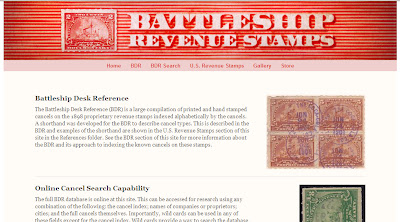 Screen capture of the new home page
A new feature unavailable on the old site is a database of railroad handstamp cancels, partially based on an old list of Tolman cancels in Bob's possession.  To get to those lists, navigate by clicking on US Revenue Stamps right below the title.  You will then get a page allowing you to open a folder of Documentary Stamps.  Then click on Battleships, then click on Railroad Cancels.  You will then have access to a set of .pdf files of scanned images of railroad cancels: 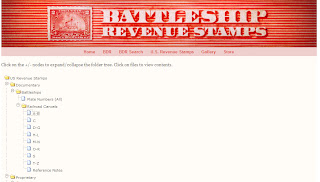 Screen capture of navigation page for railroad cancels inventory
Thanks Bob, for this work, and I look forward to expanding the listings and inventory of known cancels.  This will be a great complement to an update of the Fullerton lists.
Posted by John Langlois at 8:13 AM