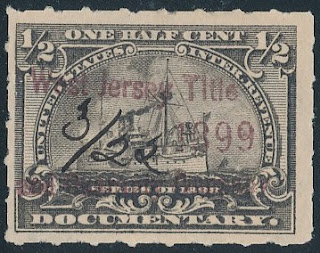 West Jersey Title
3/22   1899
& Guaranty Company
From the website of the Delaware Valley Rhythm and Blues Society:
The West Jersey Title & Guaranty Company was incorporated in 1888 by William Casselman. His brother-in-law, Thomas French, was a prominent Camden attorney, whose firm is still in business today, as Capehart Scatchard Attorneys at Law. The firm acquired the property at the southeast corner of 3rd and Market Streets in Camden NJ in 1889, and was still at that location as late as 1947. By 1959 the company had moved to 518 Market Street. Around 1974 the firm was absorbed by the Continental Title Insurance Company, and moved its offices to Pennsauken NJ. In 1995 the firm became the to Commonwealth Land Title Insurance Company of New Jersey.
During its heyday, West Jersey Title also engaged in real estate and banking throughout South Jersey, including the the West Jersey Title and Guarantee Bank of Woodbury, NJ. West Jersey Title acquired the Montgomery Stafford Farm East shortly after a railroad station was established at Laurel Springs NJ, and was instrumental in advertising and developing the area which became the Borough of Laurel Springs.