Unlike John, who serves half-a-world away, I have been fortunate enough to attend the annual meeting of the American Revenue Association in St. Louis this weekend. I've traveled through St.Louis before (stopped long enough to visit the Arch and photograph the famous Eds Bridge), but this is my first real visit to the "Gateway to the West," and to the annual St. Louis Stamp Expo World Series of Philately qualifying show. 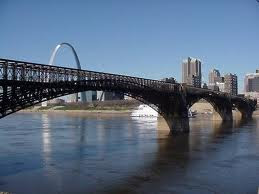 Eads Bridge photo from the City To River Blog

It's always a joy to meet long-time friends and make new ones at philatelic events, and the folks who run the St. Louis Stamp Expo have been great hosts. Kudos to them for a great show!

Preparing for the show got me thinking about St. Louis-related material in my 1898 revenue collections. I've previously blogged about some of my better St. Louis items: a letter of credit from the National Bank of Commerce in St. Louis; a wonderful $2.50 promotional credit certificate taxed as a promissory note from the Hammar Bros. White Lead Company of St. Louis; and two days ago, an export bill of lading from the Luedinghaus-Espenschild Wagon Company for wagon parts being shipped to Cuba.

In comparison, today's subject document, a sight draft from the Collins Collection Company is extrodinarily unremarkable, save its June 12, 1903 date. June 1903? That's nearly TWO years after the July 1, 1901 repeal of the tax on checks and drafts drawn at sight. Even if one considered this to be a draft other than at sight (note the endorsement "with exchange and cost of collection") which were subject to taxation until July 1, 1902, this is still nearly a year later.

Why it was taxed 2-cents has long puzzled me with the document languishing in my "what's up with this file" for years. One might expect a year date problem occurring in January, not June. Regrettably the back is blank suggesting the draft was never paid and offering no clue about a dating error. Most collectors I show it to simply shrug and hand it back.

One plausible explanation, offered so long ago I forget by whom, is that an ambitious clerk had pre-stamped a stack of blank forms with the two cents required for sight drafts and the Collins firm never bothered to attempt to obtain a refund for the unnecessary stamps when the tax was repealed. That makes some sense, but to still be using forms one, or more likely, two years late still seems a bit suspect.

I'd appreciate hearing from anyone with other explanations, or access to early 1900's St. Louis City directories, as I've not had much success tracking the Collins Collection Company either.

The 2012 ARA annual meeting will be held in conjunction with the Garfield-Perry March Party show in Cleveland, Ohio March 23-25, 2012.