The tax on stock certificates is detailed in the first paragraph of the War Revenue Law of 1898 Schedule A Documentary Stamp Taxes. Full of bureaucratic jargon, the provision is lengthy and verbose. Cutting to the chase, original issue stock certificates were to be taxed at 5-cents per $100 in face value or fraction thereof, and upon resale, any stock certificate was to be taxed at the rate of 2-cents per $100 in original face value or fraction thereof.
Wall Street brokers had lobbied Congress against taxing resales based upon their actual resale value, arguing that doing so would be tedious as clerks would have to spend extra time calculating the tax on multi-share certificates. Hence the flat 2-cents per $100 resale tax on original face value. 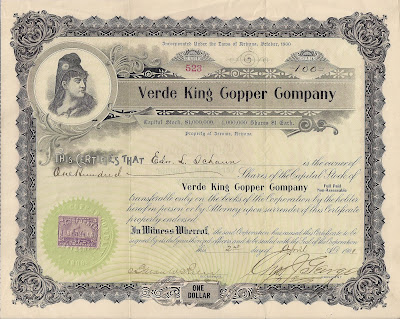 Original Issue Stock Certificate Verde King Copper Company
Jerome, Arizona Territory
April 2, 1901
At $1 per share, the 100 share certificate of the Verde King Copper Mine shown above demonstrates the 5-cents/$100 tax in its simplest form with the embossed impression of the company's seal serving to cancel the R167 5-cent battleship stamp. Although this certificate likely was issued from the company's Los Angeles headquarters, the company was incorporated under the laws of the Arizona Territory in 1900 and the mine was located in Jerome, on the other side of Mingus Mountain from Prescott, the current residence of this blogger.
Since moving to Arizona in 2004, I've kept a watchful eye out for on-document usages from the then Arizona Territory; Arizona did not become a state - last of the lower forty-eight - until February 14, 1912.
At its height the copper mine boom town boasted a population of 15,000+ and held the dubious title of "wickedest town in the west." Today's Jerome is a bit more refined; a genteel artist community peppered with B&Bs, inns, and trendy restaurants. 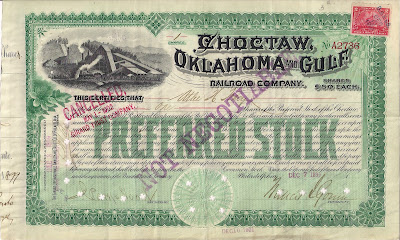 Choctaw, Oklahoma & Gulf Railroad Co.
Resale of Stock December 10, 1901
John previously has blogged about a printed cancel on a $1000 share certificate for the Choctaw, Oklahoma and Gulf Railroad Car Trust issued through the Girard Trust Company in 1902 and how earlier stock issues from the company were bought up to force the sale of the road in early 1902 thus allowing the formation of the new 1902 trust agreement.
The stock pictured above undoubtedly was one of those earlier stocks accumulated just prior to that 1902 sale process as it bears a resale date of December 10, 1901 and was subsequently cancelled by Girard Trust on May 1, 1902. Actually there is more going on with this stock than meets the eye; the original owner, Atlee H. Tracy, resided in Sevenoaks just outside of Kent, England. For the purpose of this blog, however, it neatly demonstrates the 2-cents/$100 tax on a resale of stock with an original value of $100 or less. The single share here originally sold for $50. 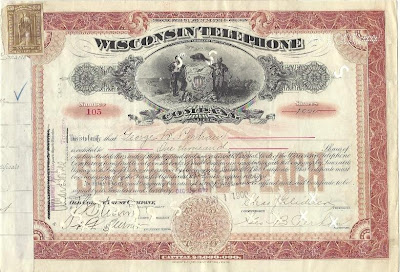 1898 Original Issue Stock Certificate
Wisconsin Telephone Company
Patetta scan
Bob Patetta kindly has provided a nice example showing BOTH the 5-cent/$100 original issue tax and the 2-cent/$100 resale tax on the same document. At $100 per share the 1000 share certificate of the Wisconsin Telephone Company shown above originally sold for $100,000. At 5-cents/$100 it was properly taxed $50. The R178 $50 Commerce issue in the upper left corner provides a hint of some of the wild, high-value stamp combinations we'll feature in upcoming blogs. 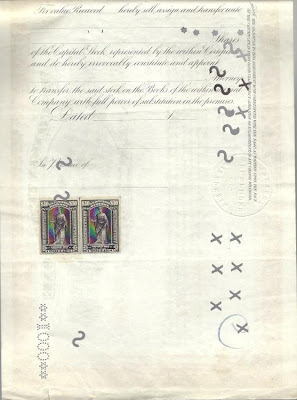