Stock Certificates -- Why All The Errors?

The Schedule A documentary taxes were not concisely worded in the War Revenue Law of 1898 and various exemptions often applied. The Law also lacked any quick reference chart detailing the specific taxes, yet the law regarding stock certificates was pretty clear. Original issue stock was to be taxed at the rate of 5-cents/$100 in value or fraction thereof, and any resales of stock were to be taxed at 2-cents/$100 or fraction thereof based on the original face value. Seems simple enough, but in practice many mistakes or misinterpertations seem to have been made, perhaps some intentionally. 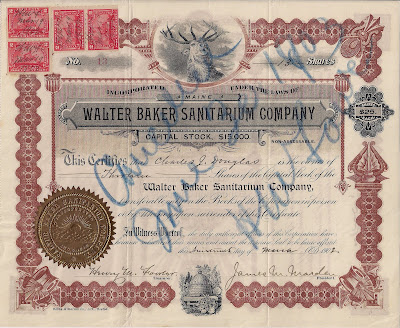 $325 Original Issue Stock Certificate
Walter Baker Sanitarium Company
March 19, 1902
As an original issue, this $325 certifcate of The Walter Baker Sanitarium Company should have been taxed 20-cents, not 8-cents. Considering the date, March 19, 1902, in the fourth year of the tax it's hard to believe this was a mere error or misinterpertation of the law. 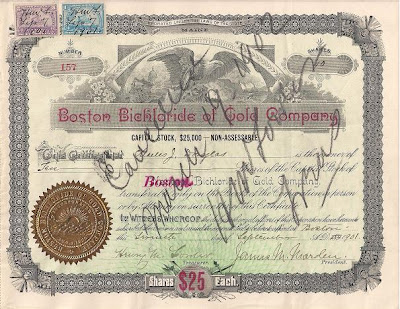 $250 Original Issue Stock Certificate
Boston Bichloride of Gold Company
September 7, 1901
It wasn't until I began gathering material for this blog about errantly taxed stock certificates did I notice that the officers for the Boston Bicloride of Gold Company, James M. Marden, President and Henry M. Fowler, Treasurer, were also the respective president and treasurer of the Walter Baker Sanitarium Company. Not surprising then we find the same mistake on the Bichloride of Gold Company stock; it too was improperly taxed at the resale rate rather than the original issue rate, 6-cents as opposed to 15-cents.
The two companies apparently were connected. The Walter Baker Sanitarium, Roxbury, and later Boston Massachusetts was founded in 1892 to treat nervous disorders and alcoholism. Bichloride of gold, or Keeley's cure, was then considered a useful curative for alcoholism. I've not researched the matter, nor these companies, but at first blush it all sounds a bit like snake oil and I suspect Charles J. Douglas, who bought both stocks, got snakebit by his investment in them. 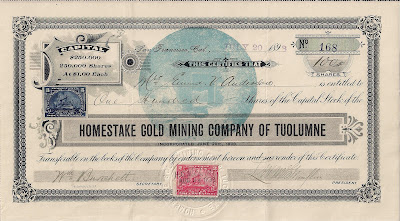 $100 Original Issue Stock Certificate
Homestake Gold Mining Company of Tuolumne
July 20, 1898, August 22, 1898, September 4, 1898
The Homestake Mining Company made a similar mistake when issuing its stock in July 1898. Curiously the certificate above is dated July 20, 1898 but wasn't taxed until August 22, and then improperly so at the 2-cent/$100 resale rate rather than at the initial issue rate of 5-cents. At least the company corrected the error on September 4 by adding a 3-cent stamp to the certificate. 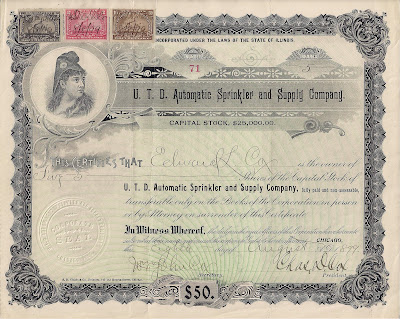 $250 Original Issue Stock Certificate
U.T.D. Automatic Sprinkler and Supply Company
August 8, 1899
The U.T.D. Automatic Sprinkler and Supply Company, at least recognized that original issue stock was to be taxed at the rate of 5-cents/$100, but they incorrectly prorated the tax on this $250 certificate applying only 12 1/2-cents rather than a full 15-cents. The law clearly states, that the 5-cent rate applies to fractional amounts less than $100. 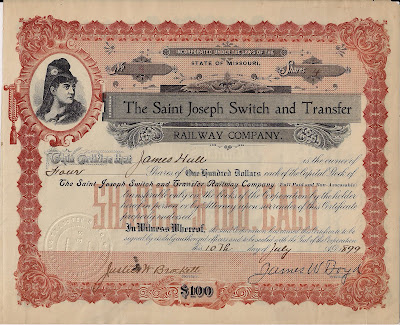 $400 Original Issue Stock Certificate
The Saint Joseph Switch and Transfer Railway Company
July 10, 1899
The Saint Joseph Switch and Transfer Railway apparently simply ignored the law and failed to tax the above certificate when first issue on July 10, 1899. As shown below, when the purchaser, James Hull, chose to sell the stock BOTH the proper original issue tax of 20-cents and the resale tax of 8-cents was paid. 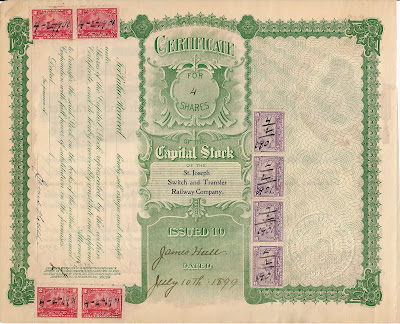 Reverse of St. Joseph Switch and Transfer stock certificate
tax for BOTH original issue and resale affixed and cancelled 4/2/1901
We'll look at some higher value stocks in further blogs. While the tax seems to have caused problem for small stakes companies like the ones shown here, I've yet to find a high value stock that was errantly taxed. Failing to abide by this provision of the tax act was considered a misdemeanor, punishable by a fine of not less than $500 nor more than $1,000 with the additional possibility of imprisionment for not more than six months.
Posted by Frank Sente at 2:33 AM