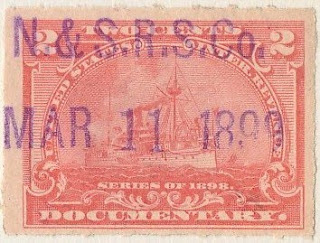 N. & S. R. S. Co.
MAR   11   1899
Need some help identifying this company.  Please send an answer, if you have one, to 1898revenues@gmail.com, or leave a comment below.
Editor's Note, March 12, 2011 -  Malcolm Goldstein identified this cancel as likely to be from the North & South Rolling Stock Company.  When this post first went up the title line above had only listed the cancel initials.  As this stamp came from a 2ct calendar replete with railroad related cancels, Mr. Goldstein's ID of this cancel is almost certainly correct.  As for the story behind this company:
From:  THE PERSONAL HISTORY AND PUBLIC AND BUSINESS ACHIEVEMENTS OF ONE HUNDRED EMINENT LUMBERMEN OF THE UNITED STATES,
THIRD SERIES, CHICAGO : THE AMERICAN LUMBERMAN, 1906

A few generations ago it was deemed essential that the young man destined for a business career should learn his trade as a whole. Today, while broad knowledge is desirable, special knowledge is all important, and the specialist is found in every walk of commercial and professional life. One of the pioneer specialists in lumber is Curtis Morrison Jennings, of St. Louis, Missouri.

Curtis M. Jennings was born at Risingsun, the county seat of Ohio County, Indiana, October 24, 1852. He is the son of John M. Jennings and Sarah B. Jennings. In this town on the Ohio River the boy spent his days in school and at play.  He was a strong, healthy lad when in 1867 he left the scenes of his birth and went to St. Louis, then a city slowly recovering from the effects of the Civil War. Seeking employment, chance took him to the office of Joseph Bogy & Co., a well known lumber firm, where he was given the position of office boy.

Another youth who entered the employ of the firm a short time after Curtis M. Jennings was John S. Berthold.  Both lads were industrious and quick to learn, and advancement came to them as a reward for the interest taken in the business of their employers. A strong feeling of friendliness sprang up between the two young men as they labored together, and there was more or less rivalry between them, to see who could gain promotion first. Thrift was characteristic of both, and by 1872 they had saved enough money to take advantage of an opportunity to buy out the business of Joseph Bogy & Co.

As the firm of Berthold & Jennings, Mr. Berthold and Mr. Jennings began the wholesaling of lumber in St. Louis.  Experience formed no small part of the assets of the partners, and from the start the firm's business prospered. Mr. Jennings was not a dreamer, nor did he evolve any impossible schemes, but he did plan and shape the affairs of the concern along lines that were out of the ordinary in the lumber industry.

Five years after the firm was organized the volume of business demanded larger supplies of stock than could be secured at mills not controlled by the concern. To provide adequate stocks Mr. Jennings proposed operating sawmills, and mills were secured in Missouri and Mississippi, where yellow pine was manufactured, to be marketed in St. Louis, Chicago and the West generally. The milling business was abandoned in 1890, the firm following the wholesale business exclusively and handling yellow pine and oak lumber, particularly heavy building timber and material for railroads and car construction. This line was gradually developed until in a few years the retail trade was dropped altogether and the firm catered alone to the large consumers. These lines have been adhered to steadfastly, and the firm is known throughout the country by lumber contractors of great city structures and factories, railroad purchasing agents and car building companies.

From 1877 to 1890 Berthold & Jennings maintained yards in East St. Louis, where was carried a stock of from 4,000,000 to 5,000,000 feet of car sills. The yard was discontinued when it was found shipments could be made promptly from the mills where the orders were placed. The firm places its business with several yellow pine mills in Missouri, Arkansas, Louisiana and Mississippi, taking practically all their output. A yard is operated in St. Louis to care for certain lines of trade and a large stock is carried at this point.

Shortly after Berthold & Jennings engaged in the manufacturing line it was found that the transportation companies were unprepared to furnish rolling stock designed for the purpose of carrying large timbers. In 1878 the firm bought 100 flat cars, instead of relying upon the railroads for cars, and ten years later was incorporated the North & South Rolling Stock Company, of which Mr. Jennings became treasurer. At the
time the first order for cars was placed, the Chicago, St. Louis & New Orleans Railroad — now a part of the Illinois Central Railroad — did not have enough cars of the proper length to ship heavy lumber, and this was the chief reason why the firm decided to have its own cars. The business of the company grew beyond the expectations of its promoters and today the North & South Rolling Stock Company has 500 cars, including refrigerator, box and flat cars, in its equipment. Not having use for this number of cars in its own business, it has leased many of them to different individuals, corporations and railroads.

Another company in which Mr. Jennings is interested is the Excelsior Car Roofing Company, of which he is president.  This company, which is incorporated, manufactures galvanized iron roofing at St. Louis, and the plant has an annual capacity of about 15,000 roofs. The concern was incorporated in the year 1892.

From the start Mr. Jennings' lumber career has been that of a specialist — car material, heavy railroad and heavy building material, and a rolling stock company organized to own cars for the carrying of heavy material, have been his specialties, with the car roofing business as a side issue. But all of these lines are related, and he has followed out the ideas originally conceived when he embarked in the lumber business. He has not been tempted from this path by the success of lumbermen in other lines of the industry — he has not sought after strange gods in new ventures — but has remained a specialist.