I picked up this wire transfer recently on eBay, thinking that it might be a good subject for a blog post, as well as an interesting addition to my collection. Now that I have it, I'm puzzled by two things. 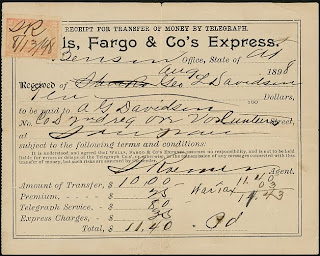 The document is a receipt for transfer of money by telegraph, with a two-cent battleship paying the tax on an "...order for the payment of any sum of money..." The person sending the money was George L. Davidson (Davidsen?), perhaps of Benson, Arizona Territory - Mr. Roemer (?) has atrocious handwriting, but who am I to talk? The recipient is A.G. Davidson, of Company D, Second Regiment of the Oregon Volunteer Infantry. But the location is, to me, unreadable.
In August of 1898, the Second Regiment of the Oregon Volunteer Infantry was engaged in the surrender of Guam and the invasion of Manila. That does not help me decipher the location where Wells Fargo was to deliver the money. Can anyone make an educated guess?

The second thing that puzzles me is the tax rate. If the transaction was treated as domestic, even if the recipient of the money was in the Philippines, which could have been the case since he was there as a result of serving in the National Guard, two cents would have been the appropriate tax. If it was treated as a transfer abroad, the rate would have been four cents unless the document was issued in duplicate or more, in which case we would be back at two cents for an amount under a hundred dollars. However, the receipt itself states "War Tax .03." How could the rate not be in an even amount of cents? Was Wells Fargo adding a penny for supplying the stamp? They used a two-cent stamp, in any event.

Any help and/or ideas concerning this document would be appreciated.

The Second Regiment of Oregon Volunteers remained in the Philippines for several years as a result of the insurrection that followed the Spanish surrender.
Posted by Bob H. at 9:09 PM