A Battleship Revenue on a Package of Face Powder

The Henry Tetlow Company was "founded" in Philadelphia in 1849 to manufacture and market toiletries. One source (see link at end of article) says that Henry was eleven years old at the time, and that he did not emigrate from England until 1851, but the company existed in some form then, and he began to run it while in his twenties. By 1866 the firm started using zinc oxide in their face powders in place of powdered lead, but did not choose to patent the idea. 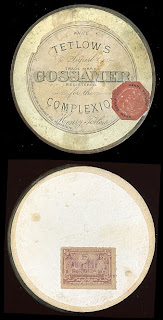 The firm introduced Gossamer face powder circa 1888, and was still marketing it into the Spanish-American War tax period. 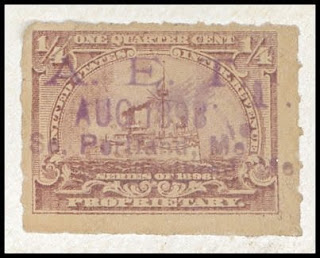 The battleship revenue on this face powder package was not applied by Tetlow. The initials are A.E.T. and the location is Portland, Maine. The stamp was probably applied by the local distributor. 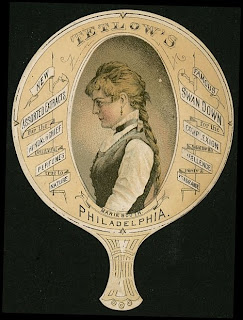 A Tetlow trade card, probably from the late 1800's. 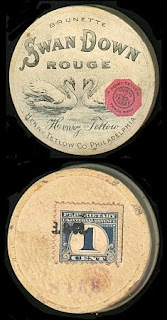 The Tetlow firm lost most of its competitive advantage during the early part of the twentieth century, disappearing from view around 1940. The revenue on the bottom of this package of Swan Down rouge was issued in 1919 and would have been used until November 23, 1921. 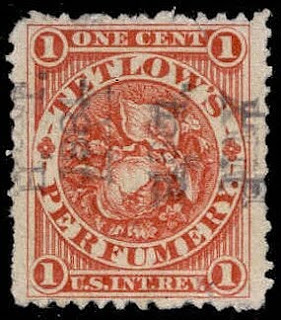 And while we are showing revenue stamps having nothing to do with the 1898-1902 period, here is a copy of the private die proprietary stamp that the company used from 1881 to mid-1883.
For more information on Tetlow, see www.collectingvintagecompacts.blogspot.com/
Posted by Bob H. at 6:00 AM