Most of us who collect revenues of the Spanish-American War Tax era have a few covers mailed using the tax stamps of that period. I do, and only two of them are worth showing to anyone else. 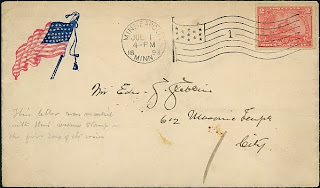 The first is a first day use of a two-cent battleship on a patriotic envelope mailed from Minneapolis. It does tell us something useful: battleship revenues were available in the twin Cities area on July 1, 1898.
I tend to believe that most of the larger population centers were sent IR overprinted postage, while battleships were distributed to somewhat smaller areas. The first day usages of battleships on checks and certificates of deposit that I own or have owned are from Nevada, Arkansas, Montana, South Dakota, Kentucky and outstate Missouri, while my first day uses from Philadelphia, Hartford, Saint Louis and Boston are all overprinted postage. 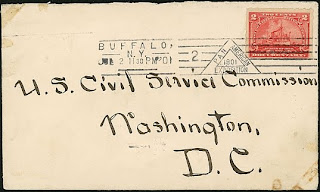 My second favorite use of a battleship revenue for postage is this one, sent from the Pan American Exposition grounds in Buffalo, NY to the US Civil Service Commission in Washington. It apparently went through the mails without a hitch.
Posted by Bob H. at 5:48 AM