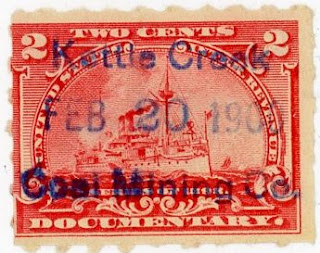 Kettle Creek
FEB    20    1900
Coal Mining Co.
Scan courtesy of Bart Rosenberg who added this:  Kettle Creek had 6 mines around Bitumen, Pa from 1874 to 1929, and has been the site of a major environmental cleanup in recent years because of these mines and associated strip mining.
From The New York Times, November 5, 1888:

SIXTEEN MINERS KILED.
THE TERRIBLE RESULT OF AN EXPLOSION OF GAS.
WILLIAMSPORT, Penn., Nov. 4.--Word reaches here to-day of a terrible mine horror at the Kettle Creek Coal mining Company's mines at Cook's Run, Clinton County.  On Saturday afternoon about 4 o'clock George L. Miller, Superintendent, heard a terrific report, and arriving at No. 2 mine found that an explosion had occurred.  He immediately carried the air to the face of the work, entered the mine, and within one hour had recoverd 14 dead bodies.  Six injured miners were removed, one of whom died soon afterward.  It is feared that one or two more will die from injuries sustained...
The general theory is that in working a blast a gas feeder was struck, filling the chamber with gas, which, coming into contact with a miner's lamp, caused the fearful explosion.  A gas-feeder is a pocket of gas embedded in the coal, and as soon as a pick is struck into it the gas escapes with a rush.  Mr. Miller, the Superintendent, is a thorougly practical man, and is at present one of the board for the examination of mine inspectors, holding his commission from the State.  The Kettle Creek Mining Company is composed of Williamsport men, and its mines have been in operation about four months.
Posted by John Langlois at 12:01 AM