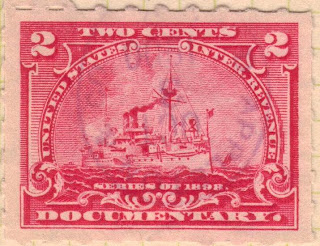 D. APPLETON & CO.
OCT
3
1900
D. Appleton & Company was a publishing company located in the United States.  The company published many famous and best-selling books, including:
The company no longer exists, having been merged with The Century Company in 1933 which was in turn merged with F. S. Crofts.  That company was purchased by Meredith in 1960, which was then purchased by Prentice Hall in 1960...and so on.


Meanwhile, this stamp has a couple of other interesting characteristics independent of its cancel.

The C in Cents has a layout dot or marking in the lower portion of the C.  This plate anomoly was documented in this post from January 5, 2011.