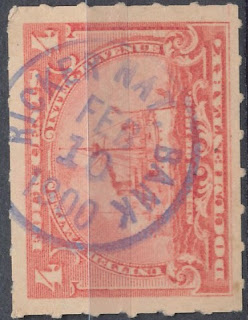 RICKER NAT'L BANK
FEB
10
1900
From Representative Men and Women of Quincy, Illinois, 1899:
So long as Quincy stands the name of Mr. H. P. J. Ricker will be honored in this community.  Mr. Ricker occupies a position peculiarly his own. His long and active life has been devoted largely to improving the city of his choice.  While he has accumulated property, probably more largely than any other citizen, he has improved it, dotting waste places with substantial homes, business blocks and factories.  He has bought property which had no attractions for a less far-seeing man and has created desirable residence localities. But for him the progress of improvements would have been very much slower, and not for many years to come would Quincy be as attractive as it is to-day.
While he has done this, Mr. Ricker has founded and built up one of the greatest banking institutions in the west, an institution with resources of over $3,000,000, and has made for himself a name among the leading financiers of the country. All of this he has accomplished from a very humble beginning. Mr. Ricker was born in Germany in 1822 and emigrated to America with his parents in 1839, landing first at New Orleans. Then he came up the river to St. Louis, and on March 4, 1840, located in Quincy. His first employment was with the late Gov. Wood as an ordinary laborer, thus assisting his father in paying for two lots purchased from his employer. He was afterwards employed as a clerk for S. &amp; W. B. Thayer, Charles Holmes and Albert Daneke, and in 1849 associated himself in the mercantile business with Leopold Arntzen. For seven years this business was very successful and was afterwards supplemented with the produce business. In 1858 Mr. Ricker was elected police magistrate and was re-elected in 1862. It was at this time that he laid the foundation for his present extensive bank. Commanding the confidence of the community to the highest degree, he began the banking and exchange business in a small way, but it prospered steadily, and in 1865 he bought out the banking house of John Wood &amp; Co., on Fifth and Maine streets. Soon after, Mr. Bernard H. F. Hoene became a partner in the business and the bank was located on Hampshire street, between Fifth and Sixth.

Later the Ricker National Bank was organized, of which Mr. Ricker is the president and the leading stockholder, and the present substantial banking house was built. Mr. Ricker was one of the organizers of the German Insurance and Savings Institution, one of the promoters and leading stockholders of the Quincy, Missouri &amp; Pacific Railway, a director in the Gas and Electric Light companies, and is now treasurer of the Menke &amp; Grimm Planing Mill Company. He has never sought public position, but in 1884 was the unanimous choice of his party for state treasurer, a compliment which came to him entirely unsolicited. A resident of Quincy for nearly sixty years, Mr. Ricker's life has been a very active one. He is still in active life, giving his attention to his extensive banking and other interests, an honored and universally respected citizen. 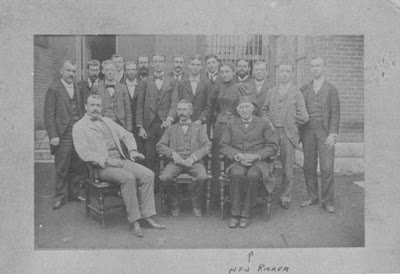