For several years I have been studying the cancels in the 2c battleship calendar that is linked on this site (see the right side column and scroll down).  One stamp has a set of four question marks immediately below it, presumably put there by Henry Tolman.  For years I've had the same set of question marks in my head about this cancel.  But recently, and quite literally, I had a eureka moment, and saw very clearly that this stamp was of course canceled by the Eureka Springs Railway. 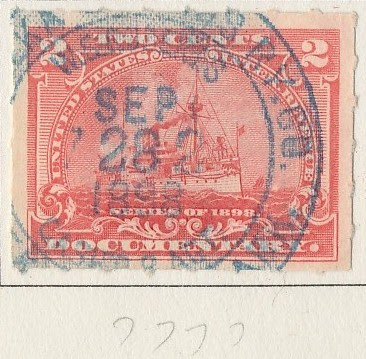 some of the above is suppositional
Langlois scan

"The Eureka Improvement Company can be credited with at least two major contributions to the development of the town as a popular resort. The first was funding and constructing the Eureka Springs Railroad. In 1880 the nearest railroad terminal was the St. Louis and San Francisco Railroad depot in Pierce City, Missouri, 55 miles from Eureka Springs. The people coming to the springs had to depend on a nine hour coach ride from Pierce City to complete the trip. The following year the railroad line reached Seligman, Missouri, only 20 miles from the resort area. Seeing the need for a railroad line into Eureka Springs, the Eureka Improvement Company began promoting and planning for what became the Eureka Springs Railroad. Completed in 1882, the railroad brought great prosperity to the town not only in the health trade but in the commercial industry as well. The railroad terminal was the nearest depot for the isolated counties to the east and southeast. Therefore, Eureka Springs became an important commercial center for the area. Another benefit, in connection with the railroad was the establishment of a St. Louis and San Francisco Railroad shop. The benefits of the railroad and its running of as many as six trains a day seemed to assure the future economic success of the town." 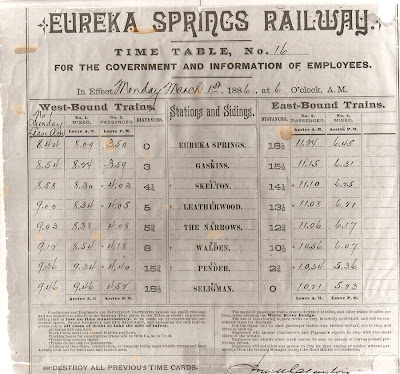 1886 ES RY timetable showing times and station stops from Seligman, Arkansas to Eureka Springs.  Seligman Arkansas was named after Joseph Seligman, scion of the Seligman banking family and the banker of Jay Gould, a baron of railroads in the US southwest.  Seligman interests would make heavy use of 1898 revenues stamps through their financial operations in New York, while Gould controlled railroads would use a major share of battleships on waybills and checks throughout the southwestern United States.