Over the weekend, I was contacted by a reader of this site located in Tokyo Japan regarding my interest in, and the potential value of, multiples of the 2ct proprietary battleship revenue stamp.  This is a good opportunity to look at the current and commonly listed values for this stamp, in single, multiple, unused, and used form.

As with all stamps in the battleship revenue series, there is nothing especially rare or valuable about this stamp.  Let's take a look at current values:

As many readers of this site know, there are two 2ct battleship stamps, one from the documentary series and  another for the proprietary series.  The documentary 2 cent stamp was largely used to pay the 2ct tax on bank checks, and the majority of used 2ct documentaries were used this way.  100s of millions of the documentary stamp were printed, and in both used an unused form the stamp is fairly common.  The 2ct proprietary is a bit different, as far fewer were printed and used.

Demand for the proprietary 2 center was a small fraction of that for the documentary stamp.  Normal patent medicine items did not have an accompanying tax schedule that required the use of a 2 cent stamp, so the famous patent medicine or "snake oil" preparations of the day did not use this stamp.  There were designated uses, though, including the taxation of chewing gum (chicle was a recent discovery at the time of use of this stamp) and taxable wines, in particular sparkling wines like champagne.  On this site you can find many copies of this stamp canceled by Mumm, the champagne maker, by clicking on the Mumm stamp in the far right column (scroll down a bit to find the stamp).

Perforation types:  two types of separation schemes were used on the battleship stamps, and the 2ct proprietary included both.  The stamp above is an example of rouletting, in which a roulette wheel, or a wheel consisting of short razor blades, cuts a series of staccato lines in the sheet.  No paper was removed from the stamp sheet in process.  Hyphen-hole perforating, however, does remove paper, and cuts a series of slots in between the stamps.  The plate block below contains very clear and evident hyphen hole perforations.  This distinction is important, as the value of many stamps in the battleship series varies greatly depending on whether the stamp is rouletted or hyphen-holed.

In the case of the reader from Tokyo, his unused hyphen holed strips, assuming the gum on the back of the stamps is intact and undamaged, can value his stamps at retail by multiplying $7.25 times the number of stamps he has.  One minor tragedy associated with his stamps are that they were once in block form, and had the selvage with plate number attached.  As with all the battleship revenue stamps, intact complete plate blocks are scarce, and the 2ct proprietary is no exception: 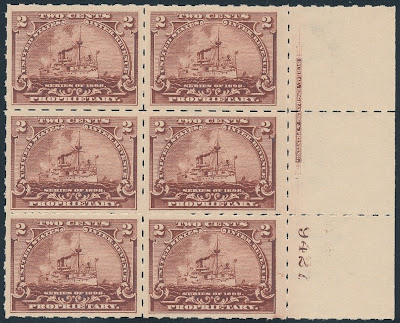