The identity of this cancel is based on an educated guess and needs a confirmatory on-document example.  If you have a D. F. C. Co. cancel on-piece, please write to me at 1898revenues@gmail.com. 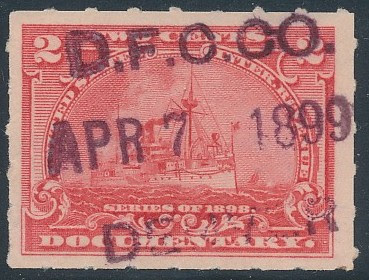 The Denver Fire Clay Company had its origins in a drugstore owned and operated by Joab Otis Bosworth at 411 Larimer St. in Denver.  The year was 1876 and Bosworth had already began experimenting with fire clay hoping to develop assay products including scorifiers, crucibles and muffles to compete with those being imported from Europe. The assay business was booming and Bosworth quickly created a product line.  He formed a partnership known as Bosworth, Babcock & Co and began supplying Colorado assayers with a variety of products including chemicals, mining equipment and supplies, and clay crucibles under the name Denver Fire Clay.

In 1878, Bosworth enlisted William Hover, an assayer from Salt Lake City, to become a business partner in the drugstore and Bosworth devoted full time to the fire clay business. The Denver Fire Clay Co. at 31st and Blake Streets was incorporated in 1880 with a capital stock of $20,000. Bosworth was elected President, F. M. Case, Secretary, George Snyder, Jr., Assistant Secretary, and A. E. Smith, Plant Foreman. Much of DFC’s early production was of fire-resistant bricks for the construction of smelters. In 1890, Bosworth was killed in an explosion at the DFC store on Larimer St. and his widow continued the business constructing a new downtown building to house the retail store at 1742 Champa Street.