By December 1900, the list of CBOT members included many Barretts and a Farnum, but also a Barrett, Farnum firm.  It appears the the firm's failure in September 1899 was permanent.  See the NYT article below. 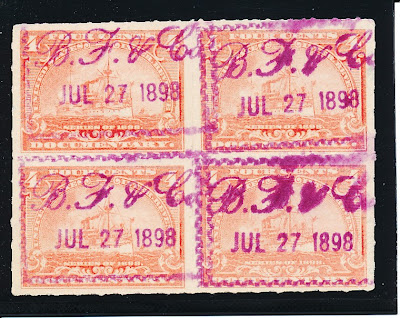 These cancels are from a CBOT lot.  I would like to confirm that they belong to Barrett, Farnum & Company or to Bartlett, Frazier & Company, both CBOT firms in 1898.  If you have an on-document example that can provide the confirmation, please write 1898revenues@gmail.com

The risks in trading in futures is partly reflected in the article below:

Chicago, Sept. 21.--The firm of Barrett, Farnum & Co., a wealthy and influential board of trade concern here, failed today.

The firm had sold heavily short during the past three days, plunging in the expectation that the New York stock panic would result in a break in wheat.  The shortage of the firm is variously estimated at from four to five million bushels of the December option.

It was noticed yesterday that Barrett, Farnum & Company were heavy buyers--the heaviest in the local pit, taking in about a million in an effort to cover.  The price held firm with a strength that puzzled the theorists in vew of the bearish tone of the news.  Again this morning the brokers representing the firm were busy in the pit, but all efforts proved of no avail.

The crash came at 11 o'clock, when the deals went into the clearing house.  Barrett, Farnum & Company in a hastily scrawled notice announced the inability of the firm to fulfill its contracts.  Then the scene took on the tone of a panic...

Meanwhile, Mssrs. Barrett, Farnum & Company had closed their doors.  James Walker, manager of the concern, when seen, declared that he was as much surprised as any one at the suspension, and gave as his opinion that the firm would be able to resume business inasmuch as the subsiding of the panic had left wheat fluctuating narrowly.