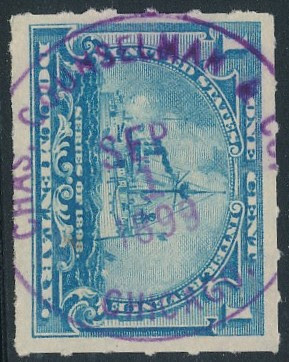 Charles Counselman was Chicago Board of Trade Member #312 and traded in grain and provisions.

From A History of the City of Chicago, Its Men and Institutions:

Charles Counselman, son of Jacob and Mary Counselman, was born at Baltimore in 1849. The family of Counselmaan is of Dutch origin, and is on the list of the pioneers of Maryland. Mr. Counselman received sound rudimentary education in the public schools of Baltimore, and in early youth pursued the study of law under the preceptorship of the late Judge Hammond of Howard County, Maryland. His health gave away under the of close application to books, and under advice of physicians he started west ward in quest of a business less sedentary than that of law.

Arriving in Chicago in 1869, Mr. Counselman engaged himself as a clerk in the then well-known commission house of Eli Johnson & Co, ; thence he transferred his services to the oil firm of Handford & Co., but soon returned to the commission trade, in the services of his first employers.

Early in 1871 Mr. Counselman was encouraged to begin business on his own account, and was enrolled as a member of the Board of Trade. The great and historic fire that year drove him out of his first quarters, but he speedily opened a new office on Canal street, to which locality the board was removed, pending the reconstruction of its ruined building. From then, until now, Mr. Counselman has been a prominent factor of the vast grain business yearly transacted in Chicago.

He is senior partner in two firms—that of Counselman & Day, and that of Charles Counselman & Co. The first-named firm confines itself to commissions and purchases on the Board of Trade and New York Stock Exchange, the latter conducts one of the largest elevator businesses in the country. The city elevators operated by Counselman & Co. comprise the large plants at South Chicago and the famous Rock Island elevators on Twelfth street.

The former are owned by the Counselman firm, the latter are leased property. The two systems have a yearly storage capacity of 6,000,00Q. bushels. In addition to these the firm manages several elevators in out side towns, with a yearly capacity of 4,000,000 bushels.

The Counselman firms have experienced, and gone successfully through, several storms -of commercial panic, always paying one hundred cents on the dollar in the worst times, and always making their fair share of profit in flush seasons. To-day they are among the most favorably regarded of the enterprises in their domain of business.
Posted by John Langlois at 6:00 AM