The first day of the revenue tax supporting the Spanish American War was also the date of the best known battle of the war.  The Rough Rider's charge up San Juan Hill, Frederic Remington's famous depiction of the scene, and Teddy Roosevelt's role in the charge have made the event almost as well known as the explosion and sinking of the battleship Maine. 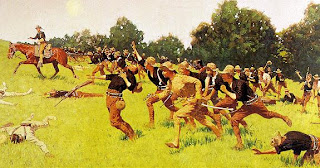 Frederic Remington's famous painting of the charge
San Juan Hill and Kettle Hill (which is the subject of the title art of this blog) are part of the San Juan Heights.
The battle on this day made the career of Teddy Roosevelt.  When he returned to the United States he was soon elected Governor of New York, and soon after that, nominated to be McKinley's running mate.
Posted by John Langlois at 12:01 AM