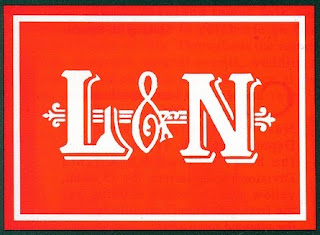 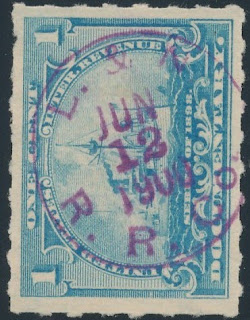 L.  &  N.
JUN
12
1900
R.  R.  CO.
When I was a boy growing up in New Orleans and on the Mississippi gulf coast, L&N and Illinois Central trains and their locomotives produced the most common sights and sounds among all railroads.  The L&N was one of the greatest of the southern railroads.  Its mainline cut south through Alabama to the Gulf Coast.  The Illinois Central ran south through Mississippi to get to New Orleans.  The L&N played a major role in the Civil War and in World War II.  But like almost all of the great early railroads, the L&N has been consolidated with others.  The L&N is now a part of CSX. 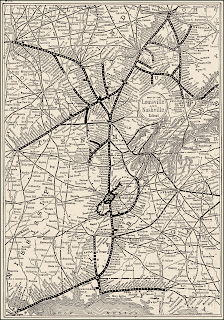 1896 L&N Route Map
Author's Note:  From the point of view of somebody who grew up hunting and fishing in the Louisiana marshes, enjoying summers and weekends on the Mississippi Gulf Coast, and playing on the beaches of the Florida panhandle, BP's CEO, Tony "I want my life back" Hayward, can go to hell.
See this post from over a year ago for the Gulf and Ship Island Railroad.  Ship island is a Mississippi Gulf Coast barrier island that might disappear because of the oil spill.  The oil will coat the island, destroy the vegetation and grasses that hold it together, and wave action will erode it to oblivion.
It is fascinating to watch people like the Texas Governor call this disaster an "Act of God", when every aspect of the rig and its operation were man-made, and for the head of the US Chamber of Commerce to call for the American tax payer to pay for the cleanup.  These "leaders" have no idea what they are dealing with.  There are hundreds of thousands if not millions of lives that will be permanently hurt by this disaster, and they will have no time for politicians like the Governor of Mississippi that continue to downplay the impact of the spill.  Democrats and Republicans alike are on the dole of the oil companies, but eventually the politicians, oil firms and especially BP will realize that the populist anger that will continue to mount over this spill will overwhelm even the lobbying and campaign contribution power of the oil firms.
From where I live in Nairobi, Kenya, I can't even watch the news anymore.  The news from the Gulf either makes me depressed or stirs me to anger as the places of so many thousands of hours of my childhood memories are destroyed.
Posted by John Langlois at 12:01 AM