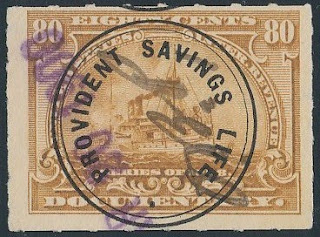 PROVIDENT SAVINGS LIFE
XXR 20 1900
This looks like a printed cancel, though I would like confirmation and a story behind this cancel if one exists.
In answer to this query, Frank Sente sent in the following image and analysis explaining why the cancel was likely printed: 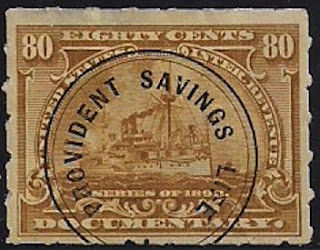 "A clear sharp cancel certainly is suggestive of a printed cancel. Note that although my Provident isn't socked on the nose like yours it does exhibit the exact same axis orientation as yours.  If they were handstamped it would be hard to maintain an EXACT axis like that. Having a third confirming example would be helpful.  The exactness of the axis orientation, at least to me, also suggests that some type of print master was set up to make this cancel. We need someone familar with early 20th Century printing techniques to take a look at these."
For background on Provident Savings Life is this clip from The Monetary Times of March 27, 1903: 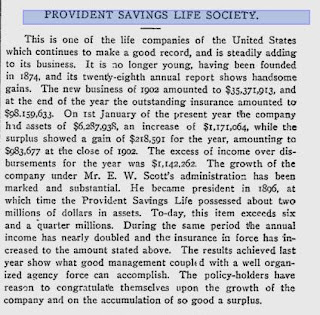