Yes, June 29, 1898.  Frank Sente sends in this Bill of Lading from the West Shore Railroad of the New York Central and Hudson River Railroad for a shipment by the Jacob Hoffman Brewing Company of New York.  The BOL was filled out and a tax stamp applied two days before the tax went into effect.  Not only was the tax stamp not needed, but there were few of the battleship stamps printed and distributed by June 29.  So this is a very unusual and interesting item. 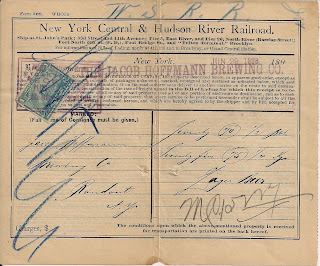 West Shore RR and New York Central and Hudson River Railroad bill of lading for 70 half barrels and 75 quarter barrels of lager beer produced by Jacob Hoffman Brewing Company
Every bill of lading during the official tax period which started July 1, 1898, required a one cent documentary tax stamp
Frank Sente reportes that "by 1898 Hoffman was shipping beer upriver to Rondout(Kingston,NY) from his NYC brewery likely to supply his operation there that serviced daytrippers from NYC to Kingston Park." 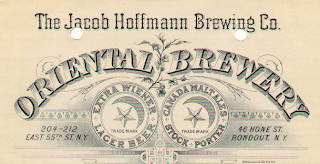