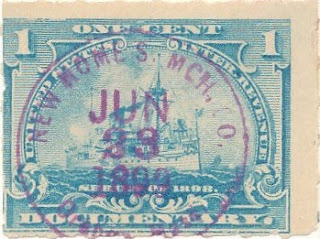 NEW HOME S. MCH. CO.
JUN
23
1899
Orange, Mass.
From the Sewing Machine Collector website:
The New Home Sewing Machine Co was formed in 1882 at Orange, Massachusetts, following the reorganization of the Gold Medal Sewing Machine Co. Their machines were sold using many marques. It has been claimed that by 1884 production reached 500 machines per day. The company also boasted a considerable needle manufacturing facility, producing needles for competitors' machines as well as its own. The company was also well known for its greyhound trademark.
Reports state that in the year 1906-1907 sewing machine production was approximately 150,000, with a workforce of 743. By the 1920s the company began to lose ground against competitors, and around 1930 the Free Sewing Machine Co took control, with plant moved from Orange to Rockford, Illinois. It has been estimated that 7 million New Home machines were in use by 1937.