I received my Bachelors Degree from Northwestern University in Evanston, Illinois, where the name Searle was synonomous with the student health center.  A little research into the history of Searle reveals a complicated and controversial past,  from its development of the first commercial oral contraceptive, Enovid, to the development of NutraSweet, and from the tenure of Donald Rumsfeld as its CEO and then President between 1977 and 1985.

Searle and Hereth, which would eventually be renamed G. D. Searle & Company, only exists now as a part of Pfizer corporation.  The Searle name has been retired by Pfizer, and lives on mostly through the foundation of William L. Searle and philanthropy done under the Searle name over many decades of the 20th century. 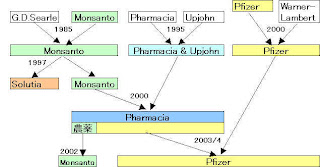 Pfizer/Monsanto family tree showing Searle's acquisition by Monsanto in 1985
Searle and Hereth did not begin to use printed cancels until late 1900, and they did not print any private die stamps.  Presumably all of their products utilized proprietary stamps canceled by hand.  Below are images of two types of Searle and Hereth handstamp cancels.
Cancelled on the second day of tax period.
Image courtesy of Frank Sente 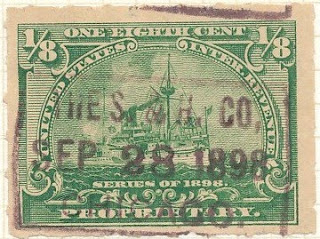