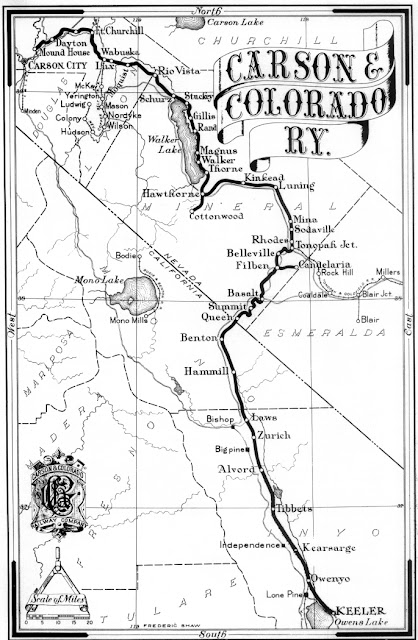 The Carson and Colorado Railway was a narrow gauge railroad that ran through eastern Nevada down to Keeler California.   It was incorporated on May 10, 1880 as the Carson and Colorado Railroad, and construction began that month. 3 ft  gauge track was used to keep costs down.  The railroad was sold to the Southern Pacific Company in 1900, which was bad timing for the C&C's original investors, who by 1900 had given up the road's profitability.  Silver and gold was discovered at Tonopah, Nevada and Goldfield, Nevada, and provided major revenues shortly after the Southern Pacific purchase. 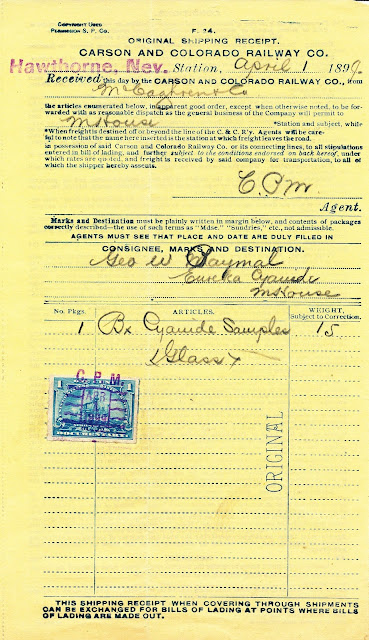 Carson & Colorado bill of lading for a box of cyanide samples from Hawthorne, Nevada to Moundhouse, Nevada.  An agent at Hawthorne with the initials C.P.M. receieved the consignment and canceled the stamp on April Fools Day, 1899. 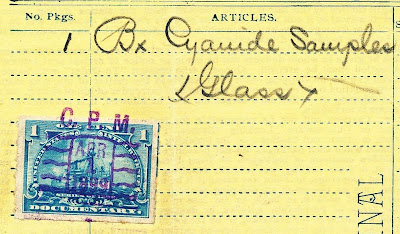 Why a shipment of cyanide on the Carson & Colorado?  Cyanide is produced in large quantities for the mining of gold and silver.  Cyanide is used to dissolve silver and gold ore.  Finely ground high-grade ore is mixed with cyanide.  Low grade ores are piled into mounds and sprayed with a cyanide solution.   The precious metals then form soluble derivatives.

The solution containing these ions is separated from the solids, which are discarded to a tailing pond or spent heap, the recoverable gold having been removed.  The metal is recovered from the solution by reduction or adsorption.

Since the C&C's main business came from mining silver and gold, cyanide was likely a common item of freight on the line.
Posted by John Langlois at 6:00 AM