A few days ago, Dave Thompson sent in this scan of stamp cancelled by Henry Belin Jr.: 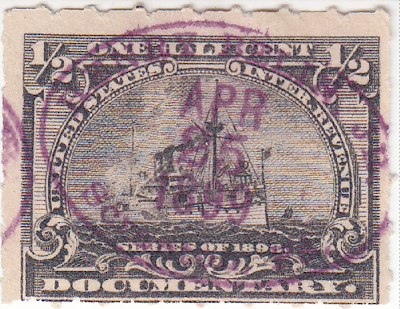 HENRY BELIN, JR.
APR
25
1899
Scranton, Pa.
Back in January 2010, I first posted a cancel by Henry Belin Jr.   At the time I knew that Belin was an executive for DuPont, but didn't know why he might have been using his own handstamp cancel.  Below is the stamp I posted in 2010, with a much clearer cancel than the one above on the 1/2 cent stamp: 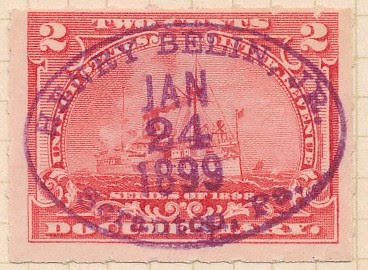 HENRY BELIN, JR.
JAN
24
1899
Scranton, Pa.
The presence of this cancel on Dave's 1/2c stamp practically confirms that Belin was involved in the insurance business.  Almost all half cent stamps were used for paying taxes on insurance, and it appears that the half cent stamp above received Belin's cancel while still in its intact pane and not on the document.  Belin or his firm were likely issuing multiple policies that called for half cent stamps, and they cancelled half cent stamps in bunches.
Posted by John Langlois at 6:00 AM