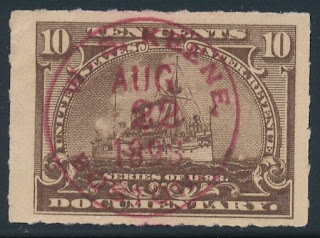 W. S. KEENE,
AUG
22
1898
BOSTON
Walter S. Keene was a member of the Massachusetts legilature in 1900.  By 1902, his firm known as the W. S. Keene Leather Company in Boston would go bankrupt.  From the volume A Souvenir of Massachusetts Legislators:
District No. 30. — Stoneham. — Walter S. Keene, Republican, was born in Palmyra, Me., Nov. 9, 1858; came to Massachusetts in 1878; educated in the public schools.  Is a sole leather merchant.  Member of the Republican town committee 12 years; of the Republican state central committee for 1900; of the Republican Club of Massachusetts and the Middlesex club.  Was a delegate to the Republican national convention at St Louis in 1896.  Member of the board of selectmen of Stoneham nine years, and five years as chairman; is now serving his fourth term as president of the Stoneham board of trade; a director of the Stoneham National Bank, and Stoneham Co-operative Bank. Holds membership in Masons, Odd Fellows, Red Men and Grange. Interested in farming. Comittee on banks and banking, and clerk of election laws in House of 1900.
Vote of district : Fred E. Buker, Socialist Labor, 182; Walter S. Keene,. Republican, 680; J. T. Nowell, Democrat, 163.
Posted by John Langlois at 6:00 AM