Yesterday, Bob Hohertz posted a couple of checks on this site that he considers "the oddest imprinted checks I've ever seen."  I'm grateful for his posting of these items, for while they are odd, they are aslo intriguing.  Yesterday evening I set about trying to learn just who was C. A. DeCamp, the signer and creator of this check.  As Bob explained, the check below, though it appears entirely handwritten, is mostly a printed product.  C. A. DeCamp and his business is acknowledged at the far left, and Mr. DeCamp's signature appears at the lower right.  The check is obviously odd because the printed portion is in manuscript.  But this in an odd item with or without the 2 cent imprint. 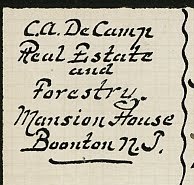 Inset from check:
C. A. DeCamp
Real Estate
and
Forestry.
Mansion house
Boonton N. J.
Mr. DeCamp appears to have been an early naturalist and conservationist in Morris County, New Jersey.  Land that he preserved and on which he created access roads for hikers in the mid to late 1800s is today a park known as The Tourne.  From his activity on his land it is clear why he might have been in the businesses of real estate and forestry.  Though why he produced manuscript printed checks is a mystery that is likely to remain unsolved.
The Mountain Lakes, New Jersey website has a wonderful history regarding The Tourne and Mr. DeCamp:
By the later part of the century Clarence Addington DeCamp's activities began to make front-page news. Many local residents still remember the small, gruff, slightly rumpled gentleman who, axe in hand, spent a great part of his life on his beloved "Torn." Born in Powerville on March 17, 1859, descendant of a prestigious Huguenot family and grandchild of Morris County ironmasters, Mr. DeCamp from the age of 15 kept a written account of the "principle facts" of his life, and from his journals we learn a great deal about the old ridge which he variously called the Torn, Tam, Toren, Tome or Toume. Toren in modern Dutch means tower or steeple. A survey map of the ancient Boonten Tract shows a western boundary intriguingly labeled "The Dutch Line". Netherlandish settlers found the upland topography impressively high, the summit towering 897 feet over the flatland below. Thus the descriptive everyday sort of designation that reflects a constant repetitiousness in Dutch place names, There are lots of "Torens" in the lofty hills of old Dutch New Jersey and New York.

On November 29,1878, we have the first written record of 19 year old Clarence's budding engineering prowess. "Today I hauled a stone off the Tarn from halfway up to put in the bottom of the well. It is about 5'3" long, 20" wide and 15" thick." As far as we know, that heavy stone is still lying on the bottom of the well at the DeCamp home in Powerville, the former Scott Mansion, now the Sarah Frances Nursing Home.

Nineteen years lager he was still maneuvering rocks and rolling boulders around to satisfy some personal whimsy or conclude some rather novel pursuit. On June 8, 1897, his journal reports that: "Last Sun. with Walter, Will, Harry, Tom and John Bowden walked up Tom. John Taylor was there & we tried with prop to move the big rock near top on South westside which rock rests on two points of ledge & 1 little boulder, the big rock weighs 40 or 50 tons. Maybe we failed to move it, but I hope someday to balance it so that it will easily be made to oscillate." Someday was not too far off for determined Clarence. The diary continues: "On June 28 or 29 Austin and I went on Tom and balanced big boulder on west side so that it exalts. Austin found a mouse nest in the cleft in side of boulder wherein an old mouse & young ones and we named the rock "The Mouse Cradle." He went on to say that young David Merritt, who was picking raspberries, happened along and helped them. Today visitors on the summit can follow a short marked trail to the big glacial erratic to which he gave such a delightfully appropriate name and witness Mr. DeCamp's well calculated manipulation.

Using only shovel, axe, pick and crow bar, he built single-handedly a road to the "Top of the Toume" and cleared paths which are still used today. Everyone was welcome on his beloved mountain. He published a short-lived and controversial periodical named the "Little Paper Called Boonton," and as sole editor and only reporter he announced in his July 13, 1894, edition that: "It is our intention to erect on the Toume top an observation tower from the top of which the climber will be more nearly able to see the traditional ships in New York Bay than he has ever seen before." On October 13 he stated that: "the Tower will be raised on Saturday, Oct. 20 weather permitting. The material has been assembled on the top of the hill ... All feel free to attend the affair. Water to drink and fire to keep warm. The able bodies will raise the tower in the afternoon, doing the preliminary work in the forenoon. The proper way to go up from Boonton is via McCaffrey's Lane. The road leading to the top that way will be cleared away and plainly marked. Guests are requested to leave the lighting of bonfires to those whom the management will appt. for the purpose. If this request is granted, damage to the property will be avoided." Now there was a tower on the Tower! This was later replaced by a second one, well remembered today.

Mr. DeCamp loved bonfire picnics and evening torchlight parades. Two years earlier he had advertised the: "Nicest Evening Entertainment Yet - A Bonfire Party! At Old App's Southside of Tourne, near Rigby's Brook. Entry through McCaffrey's Lane. Friday evening at Sundown. Tickets -250 - May be procured of the Directors. Stages will run between the Library Bldg. & McCaffrey's Lane." A picture book turnout of fun-loving revellers on the old mountain road with "Mr. Trewarffia on the grounds with ice cream and such like things for sale."

He also loved to clear and bum scrubland, and residents on the Kincaid, Stickle, and Bott farms two mfleg away in the northern valley could look southward, note the billowing smoke and make the smiling, but sometimes worried, observation that "Clarence DeCamp is burning brush today." In his later years he did set the woods on fire once or twice. All the residents of McCaffrey Lane and Powerville Road rushed to his aid with brooms and buckets of water. In May of 1891 Mr. DeCamp purchased from Morris Fox the Rattlesnake Meadow reservation, which by that year had been diminished to 94 acres of swamp and sprout land. He paid $2,700 for the property which had, over two centuries, been variously owned by Ogden's heirs, John Righter's heirs, Philip Brady, Peter Tucker and Mr. Fox. No twists and turns in etymology here. After almost three hundred years this once fearsome little pocket of timber rattlers still assumes its instinctively emotive nomenclature and is testimony to the fact that native sons and daughters have cherished and preserved the names under which our localities were born.

The Ogden Trail, dedicated by the Morris County Park Commission on May 4,1991, in recognition of the Ogden family's contribution to local, county and state history, skirts Rattlesnake Meadow and follows the line of a railroad spur proposed in 1899 to run between Boonton and Denville. It was more specifically described in Mr. DeCamp's diary as "running from Howell's No. 3 lake (in today's Mountain Lakes) to the Toren." His records reveal that he, at the age of 40, was in charge of the work, bossing 16 or 18 men with 3 carts, and spending $2,000 on grading. On October 16, "a day of Scotch mist, "he noted that the line was nearly done and that he was wondering, "What next?" It has taken exactly one hundred years to answer his contemplative question. The still evident roadbed of the spur which never came to pass has been named the Ogden Trail.

Posted by John Langlois at 5:55 AM