Correction to the August 3 Post on the Telephone Tax: Frank Sente Keeps Us Honest

Last week it seems that I may have misinterepreted the guidance of Bob Patetta who submitted the forms below for publication on this site.  I characterized the forms as written phone messages to be delivered by hand.  Frank Sente, who has been off-line lately, responded with a rather healthy email explaining the error.  The email is a short lesson in tax philately, and deserves to be published.  So here it is, with a few edits: 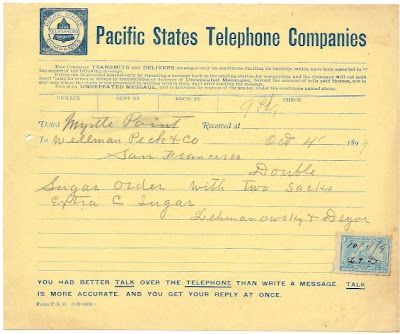 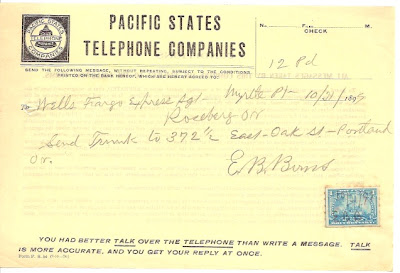 From Frank Sente:
1. If you read the fine print, both of these forms contain statements about the efficacy of having the receiving station "repeating a message back" to the sending station as being the only way of insuring against errors in transmission. This is standard classic telegraph jargon that appears, in one form or another, on the forms of all telegraph companies. And make no mistake Pacific States sent telegrams, it's real full name until after the 1984 Bell breakup was Pacific Telephone and Telegraph Company.

2. Perhaps the most telling evidence however is how the payments are noted on each form. On the first one pictured (to Wellman Peck & Co.) the notation is 9 pd.; and on the one to the Well Fargo Express Agent, the notation reads 12 pd. These notations refer to the number of words in the respective messages which is how the cost of TELEGRAMS was computed. (NOTE: on the second message, the number "372 1/2" counts as four words as each integer had to be spelled out). The price of telephone calls was based upon the destination and duration of the call, not the number of words spoken.

3. The war law specifically required companies providing phone service to pay the tax month by direct remittance to their respective district collector of internal revenue. A sworn statement tallying the number of calls billed at 15 cents or more was required with each payment. I find no reference in any of the subsequent Commissioner Decisions altering this requirment or providing for any alternative method of payment of the phone tax.

At the risk of having you find an example before I do; here's what we should be looking for: Regular individual phone bills from the period July 1 1898 - June 30, 1902 that might itemized a long distance call costing more than 15 cents as I'm sure phone companies passed on the tax to their customers. I have some individual monthly telephone bills from that period, but can't find the right now either (I suspect when I do I'll find my Pacific States document as well). Anyway all the tlephone bills I have are for normal regular service. I'm hoping to find one that shows an an itemized long distance call of more than 15 cents, the taxation threshold, as I suspect there also will be a notation like "IR tax 1 cent" or "war tax 1 cent" appended to the bill.

4. So why do the forms read "Pacific States Telephone Companies"? I believe the firm did this as a means promoting its new-fangled phone service as a better alternative to old fashioned telerams. Why would they otherwise have included the promotional advertisement at the bottom of the form that reads,

"YOU HAD BETTER TALK OVER THE TELEPHONE THAN WRITE A MESSAGE. TALK IS MORE ACCURATE. AND YOU GET YOUR REPLY AT ONCE."

I can easily visualize customers now walking out of the Pacific States telegraph office with their telegraph despatch receipt in hand, muttering, "Hmm. Maybe I should look into getting one of them phone box things. At least then I'd know my message got delivered and I'd have a response as well."


Hope this makes sense. I do wish you were correct, but these are nothing more than telegraph despatch receipts.
Frank, thanks for letting me borrow your words without prior permission.
Posted by John Langlois at 7:19 PM