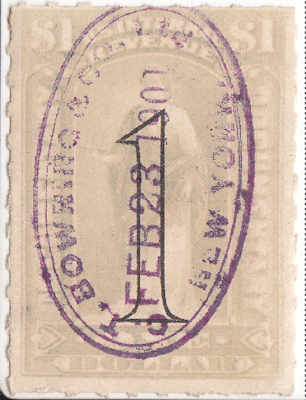 C. T. BOWRING & CO., Ltd
FEB 23, 1901
NEW YORK
David Thompson scan
From The Ships List:
Founded at St. John's Newfoundland in the 1820s by Benjamin Bowring who was greatly involved in the sealing trade, by 1823 he owned a fleet of small sailing vessels to trade across the Atlantic.  By the 1840s, his son, Charles Tricks Bowring was the functional head of the company which had expanded to Liverpool.  The 1860s saw rapid growth in the company with routes opened to India and New Zealand, Australia and West Coast of America.  From 1880 the built up a fleet of ocean going steamships and a new company, English & American Shipping Co. Ltd was formed in 1888 to operate passenger and cargo services, mostly between Liverpool, St. John's, and New York.  They also operated the Red Cross Line from the early 1880s, which ran a passenger and freight service along the Atlantic seaboard to New York and later expanded into the cruising business out of New York.
Posted by John Langlois at 9:19 PM