Here is another apparently persistent variety of Chicago, Burlington and Quincy Railroad Type I printed cancels.  This example is not as dramatic as the variety in yesterday's post.  However, it is distinctive.  Both the second R and the C in Co are damaged in this variety, with the damage to the R changes over time in the examples below.
To review, the Fullerton List documents 3 types of printed cancels for the Chicago, Burlington and Quincy Railroad.  Over 200 type Is have recently been made available to me for inspection, and I've sifted through them for major varieties.  This post is part of a series examining those varieties.
The two of the three stamps below have been handstamp dated over a one year period.  Over this period the appearance of C having a neatly planed electro remains steady. 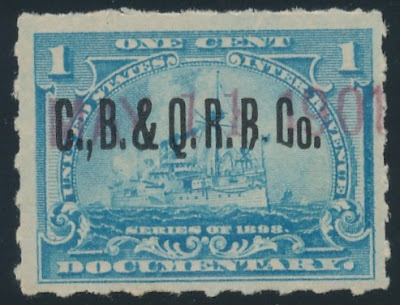 MAY  11   1901
Damaged right leg of R, apparently pushed to the left, with neatly planed off C in Co at bottom left.

Inscrutable date.
Bottom right leg of R has been shifted back to the right compared to the stamp above.  Planed C remains constant. 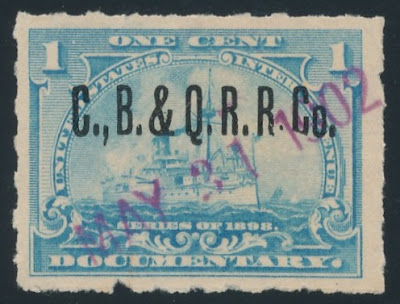 MAY  21  1902
Date one year later than first stamp above.  Damage similar to undated stamp.
Here is a new and unlisted variety by Fullerton with apparent persistence.  Here we have another collectable variety that might be included in a new list.
Posted by John Langlois at 6:00 AM