I've always had a soft spot for antique philatelic journalism (doesn't everybody?).  The Weekly Philatelic Gossip stopped publishing in 1961, but is the source for some great early work on 1898 revenues, including articles on cancels on the battleship series.
The paper was published in the town of Holton, Kansas..  Holton is due north of Topeka about halfway to the Nebraska state line.  The current town has just a little over 3000 residents, but for several generations the Weekly Philatelic Gossip came out of this small Kansas town and was one of the most important publications in philately.  At the end of this post I've included the full pages of the 1928 article I am about to review, and if you download these pages you can see the advertising that came to the Gossip from dealers all over the United States.
The editor of the Gossip in mid-1928 selected the battleship revenues as the subject for a front page article given to boosterism and a sales pitch for battleship stamps coupled with available facts on the series.  Below is most of the article in sequential order, cut into sections so I can comment as you read along.  Enjoy!

"The Battleship That Caused A War" hardly indicates the content of the article, which is about the battleship series of revenue stamps and not the Battleship Maine that exploded in Havana Harbor in Cuba and accelerated the call for war with Spain in the United States.  There is some writing about this ship, however... 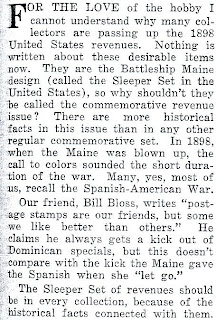 I can't argue with the author's statement that what he calls the "Sleeper Set" of US revenues should be in every collection due to their history.  This site is much about the history of this set, and about the companies that used these stamps.  If by sleeper he means the set receives Rodney Dangerfield, "no respect" treatment, I agree with that too... 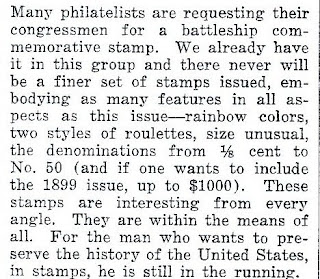 Maybe I'm missing something.  While the comment about these stamps being within the reach of everyone remains true 82 years after the printing of this article, I am not sure the claim about the fine quality of the set holds relative to other classic sets.  The Columbians?  Trans-Mississippi? 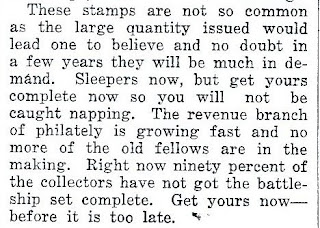 Yes!  Get your battleship revenues now before it is too late.  As he says, the old fellows are no more in the making.   I don't think anyone has to worry too much, though.  Here we are, 82 years after this article, and the old fellows are still fairly cheap.  Collecting styles have made the plate blocks valuable, but most of the singles remain cheap.  Oddly, he never mentions the differences between rouletting and hyphen hole perforations and the relative scarcity of some hyphen hole values. 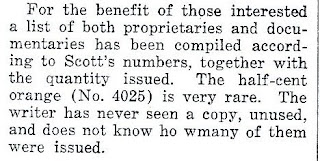 "The half cent orange is very rare.  The writer has never seen a copy, unused, and does not know how many of them were issued"  I think the author needed his own copy of Elliot Perry's book.  Then he could have known how many were issued.  Meanwhile, here is one used... 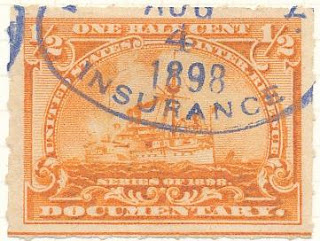 A journal like the Weekly Philatelic Gossip prospered at a time of high interest in stamp collecting and an otherwise illiquid market in information about stamps.  Here courtesy of the internet, is proof that the 1/2 cent orange does indeed exist... 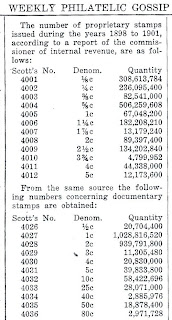 Interesting catalog numbers.  There is only one number for 1/2 cent value, so there is no differentiation between the orange and grey stamps.
Scott doesn't use this range of numbers for revenues anymore.  The company gave up the practice decades ago, even before the USPS started putting cartoon fish and other sorts of nonsense on stamps, bloating the numbers of stamps issued for modern collectors and requiring Scott to assign hundreds of new numbers every year.  Of course now all the revenue numbers begin with R. 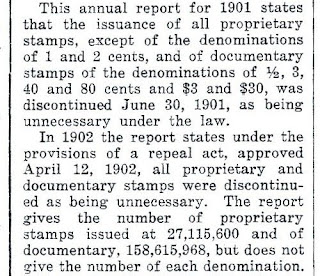 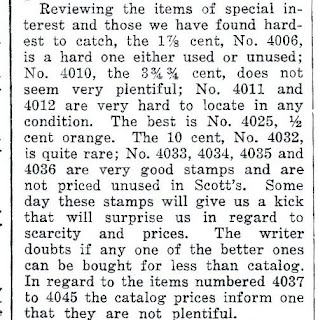 The 10 cent documentary was, according to this author, not very plentiful.  I suppose the documents on which it was used started to show up after the publication of this article? 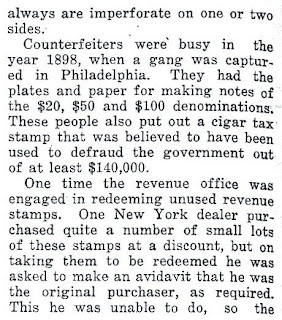 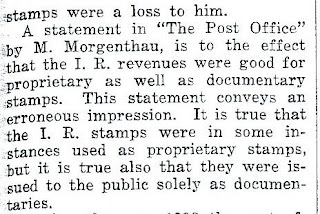 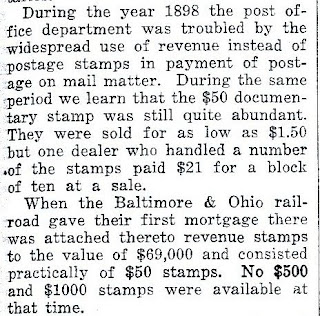 There isn't much of this type of philatelic journalism left: promotional, packed with facts, and quite long.  Open up the pages below and see the ads.  At least as interesting! 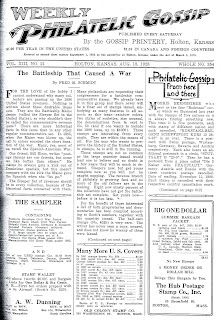 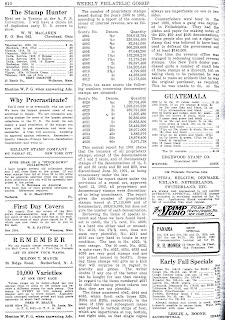 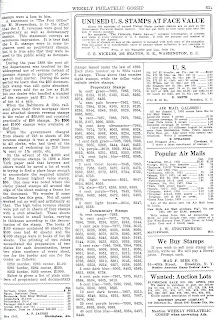