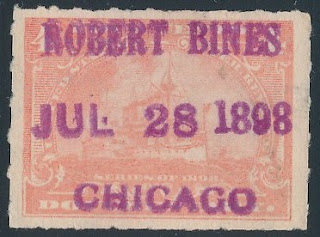 ROBERT  BINES
JUL   28   1898
CHICAGO
No telling what sort of transaction this stamp was used for unless one can find a trail of documents from Robert Bines on which other battleship documentaries are found.  Bines was a player in the high business community in Chicago.  He was born in Bloomfleld, Ohio in 1842,  arrived in Chicgo in 1866 and by 1869 was a member of the Chicago Board of Trade.  By the time of this cancel he was a member of the Board of Directors.

The Advent Review and Sabbath Herald from January 21, 1902 reported the Mr. Bines had enough capital to speculate in Chicago area land claims:

Robert Bines, of Chicago, began, on the I7th inst., the " payment, at Dowagiac, Mich., of $34,000 to the Pottawatomie Indians [$ioo to each] for their title to lands along the lake front of Chicago." He evidently believes their claims to these lands to be sustained.

Bines was in the brick business too, as reported in the History of Chicago, Illinois by John Moses in 1895:

Among the leading establishments engaged in the manufacture at this time are the following: The Tiffany Pressed Brick Company is a corporation composed of the following directors : J. Van Inwagen, president ; J. Tiffany, vice-president ; N. K. Fairbank, Robert Bines, and J. B. Lyon.  The capital of the concern is $200,000, and the value of the investment estimated at $300,000. It employs 75 hands, to whom are paid wages amounting to $4,500 per year. The value of the material used is $20,000, and of the output 100,000. The factory is at Momence, 111.
Posted by John Langlois at 12:01 AM