Fellow collector Rick Lokos sent in scans of a couple of stock certificates from The Mexican Telephone Company, a firm in which J. P. Morgan was on the Board of Directors by 1886.  Rick sent in the scans to inquire about the nature of the taxes paid on the transfer of these certificates.
I am still learning about these types of transactions and the likely taxes that were paid on them.  So I called in an expert instead of relying on myself and sent the scans to Frank Sente, who happens to have his own Mexican Telephone Company stock certificate, which can be found as the third set of images below.
Frank's explanations regarding the nature of the transfer taxes follow: 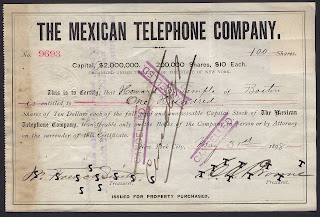 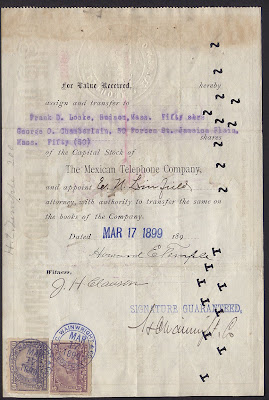 Certificate #1, back
from Rick Lokos
Howard Temple sold his 100 shares in the Mexican Telephone Company ($1,000) on March 17, 1899, during the tax period. Because the sale was transacted via a POWER of ATTORNEY, TWO separate taxes applied. 20 cents was charged for the sale of stock at 2c per $100 in original value or fraction thereof AND 25 cents was charged for the tax on a power of attorney. Hence a total of 45 cents was affixed. The usage of the 40 cent documentary is unusual. Not exactly rare, but uncommon. Attached is a similar stock from my collection showing a similar taxation [this is certificate #3 below]. Mine perhaps shows the 2 taxes more clearly with a 25 cent documentary for the power of attorney and a nice line pair of the 10 cent documentary paying for the 100 share stock sale. 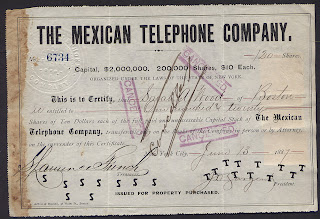 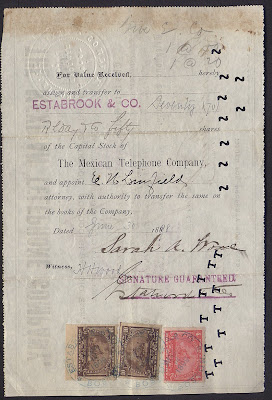 Certificate #2, back
from Rick Lokos
I find Sarah Wood's 120 share document to be the more interesting of the two. When she sold her 120 shares she too did so via a power of attorney, but note that her sale transaction is dated June 30, 1898, the day BEFORE the War Tax took effect. As such no taxes on either the power of attorney or the sale of the stock applied to Sarah's sale.
So why the 24 cents in tax on the back of this one??? I can think of two possible explanations. But first note that the stamps were cancelled by Estabrook of Boston on March 14, 1899 during the tax period. So.....
1. I suspect there was a SUBSEQUENT direct sale (with no power of attorney involved) by Estabrook on March 14, 1899 and that sale was properly taxed 24 cents at 2c per $100 in original value or fraction thereof. This presumes that Estabrook Co. somehow had acquired the 50 shares Sarah had sold to R.L. Day & Company as she had split her sale on June 30 only selling 70 shares to Estabrook, not all 120.
2. Less likely, during an internal audition in March 1899 some Estabrook employee may have thought the stock should have been taxed previously and added the stamps then.
NB: When I researched my 1998 AP article on documentary usages I recall a writeup in the NY Times about the NYC courts being overwhelmed with transactions on June 30, 1898 by realtors and other businesses trying to get paperwork done that day in advance of having to pay taxes on July 1, 1898. Sarah was either lucky or prudent to have her sale accomplished on June 30, 1898. 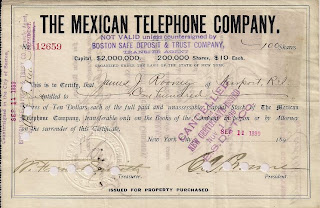 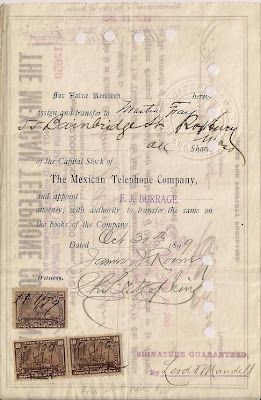 Certificate #3, back
from Frank Sente
Thanks to Frank for his guest appearance today!
Posted by John Langlois at 12:05 AM